What’s in that store bought tomato??

Hello garden gals and guys!  As a gardener, I do try to watch what kind of food I put into my body.  I want you to be healthier too, which is why I am sharing this book with you today. 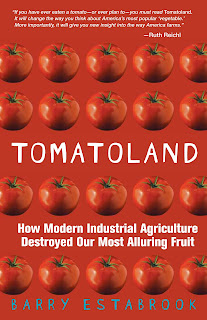 This book is about how tomatoes are grown and harvested in Florida, which is the source of 1/3 of all the “fresh” tomatoes that Americans consume.  I urge you to read it.

There is just too much disturbing information to put in one post.  But let me just share some information with you that shows how your tomatoes are grown and the affects the pesticides that are used on them had on the workers (slaves) who picked them.

Florida’s SAND, yes, SAND is not amenable to growing tomatoes. Farmers (and I use that term loosely here) inoculate the sand with what they call a “bottom mix” of fertilizer that is 20% of the nitrogen and potassium that the plant will need.  In order to fight weeds, diseases and nematodes (an organism that thrives in Florida and can wreak havoc on a crop), they kill EVERYTHING in the soil (meaning the beneficial organisms too). How do they do this? They inject the soil with methyl bromide and seal the “soil” under a plastic mulch.

Methyl bromide can kill humans after brief exposure in small concentrations. Even what they call “sublethal” doses can cause “…disruptions in estrogen production, sterility, birth defects, and other reproductive problems.”

There are so many other chemicals that are used to fight fungal attacks and diseases and many of these chemicals are still on those tomatoes when you buy them from the grocery store.  Tomatoes are also picked at 10-15 weeks (most tomatoes aren’t ready for at least 60-90 days) when they are still green, hard, and have no nutrients.  They are then taken to a factory and are gassed with ethylene gas (a gas that will occur naturally within the tomato if it is left alone on the vine to ripen).  They “gas” them to make them that pretty red color you love so much.  But that mealy, tasteless object you put into your mouth has no nutrition in it at all.  In fact, you are probably putting more chemicals than anything else into your body.

OK. If that doesn’t scare you, this will.  Before Hispanics became the main slaves to do the picking (yes, they are slaves…read the book to see why), African Americans did it.  There is a place called Lake Apopka about 15 minutes north of Orlando.  It used to be known for being one of the largest lakes in Florida.  Now, it’s known for the community of African Americans with a “…littany of medical horrors…”

One African American woman named Linda Lee listed the medical conditions she has. Remember this is ONE person.  She has: diabetes, lupus, high blood pressure, emphysema, and arthritis. Her hip has had to be replaced; her gall bladder has been removed; her kidneys have failed so she had to have a transplant; and she’s had two corneal implants. She’s only 57.  She worked for nearly a decade as a farm laborer and was routinely exposed to a host of chemicals while she worked in the fields.  And she considers herself lucky.  She said that many of her old friends have what she has, but also have “…stuff I don’t want to get…”

It’s time to be much more aware of what we put into our bodies.  Support a local farmer by buying local, and if you can, buy all natural or organic.  I’m going to grow tomatoes in the winter in my greenhouse as an experiment.  If it doesn’t work, there will be no tomatoes in this household until next summer.