Hello garden gals and guys!  Yes, it’s been a month since I blogged which is highly unusual for me during the growing season.  Let’s just say that life really got in the way for a few weeks.  I could type it, but I’d rather just let you see for yourself.

Below is a picture of one area of the watermelon area…took THREE hours just to do that little bit.  It got really tricky when I got near the watermelon plants (that I had to hunt for first).  I had to be careful to pull the weeds without killing my melon plants. 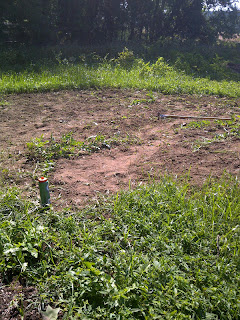 After this small dent I made in the weeds, we had to leave town for a week because the previous night’s thunderstorm left us without power and it was expected that we wouldn’t have power for an entire week.
When I returned to the garden today, I am glad that this little area was still pretty much clear of weeds.  So I finished weeding around my watermelons.  Then took these 11 bales of straw: 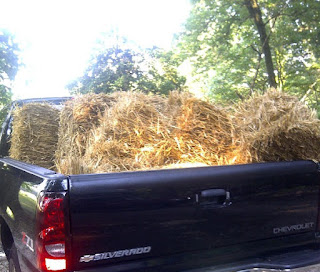 and began to spread them around my watermelon plants and my tomato plants.  This is the end result.  The video is a little shaky because my hands were tired from weeding and lifting bales of straw.
Thankfully, Cathy is going to till the rest of the weeds in and then I will cover the soil with straw until I can figure out what I want to plant.  So….it’s getting better!!
The next project is getting into the backyard garden and seeing what can be salvaged and clearing out my greenhouse which the weeds think is their personal sauna!
Until next time garden gals and guys….
Happy gardening!!!