Tips and Tricks for Growing Tomatoes and Collards

I hope you’re drying out after all the rain we had.  Seriously, I don’t think I’ll need to water my gardens for at least two weeks! I kept watching my chicken coop out back scared that animals would mistake it for an ark and start lining up two-by-two.

Water is great for our gardens, but it also has its downsides.  Let me explain.

Garden soil has billions of microorganisms living in it that help your plants grow and thrive.  There are also spores in the soil.  When it rains these spores are splashed up onto your plants.  Some of these spores cause blight.

Yesterday (Sunday) after six days of rain, I went out to check on my garden.  All of my plants grew really well, but my tomato plant branches were touching the ground. 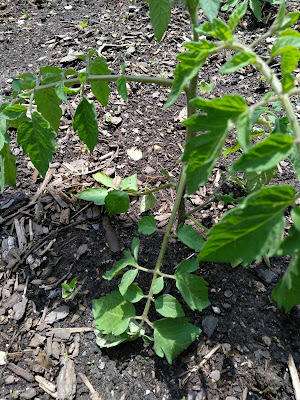 I don’t want this.  It makes it easier for water from rain (or from watering your plants) to splash up onto the leaves, bringing along with it those spores I just mentioned.
Tomatoes grow lots of branches, so I’m not worried about cutting off the ones toward the bottoms of the plants.  To try and keep my tomatoes from getting blight, I went around to all my plants and cut off all the lower branches that touched the soil or were really close to it.  This is the plant above after I cut the low-hanging branches off: 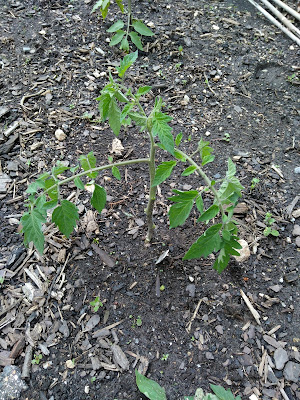 Those other branches still look like they are close to the ground, but that’s just the angle of the shot (and my crappy phone camera…one day I’ll buy a nice digital one and take better photos).
I used a very sharp pair of gardening shears and cut the branch off as close to the main stem as I could without cutting the main stem itself.
You don’t want a whole lot of open nubs sticking out because that just invites pests.  The closer you cut to the main stem, the more quickly the plant will heal itself.
As I was cutting, I noticed that some of the leaves on a few of my tomatoes had already shown evidence of blight: 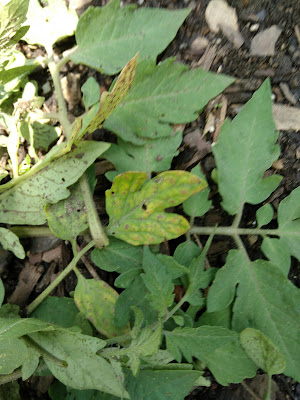 Blight is a fungus that starts at the bottom of the plant and works its way upward.  I’ve been fighting blight for years in my garden.  If you cut the leaves off as they begin to look like this, you can keep it under control.
When I cut leaves like this off I throw them in the trash can.  I do not compost them or leave them laying on the ground.  Remember, this is a fungus and it spreads very easily.  I also clean my garden shears with just a tiny bit of bleach before I use them again.
If you are wearing garden gloves, I would suggest washing them before touching other plants in the garden.  If you are just using your bare hands, wash them with soap and water before continuing your gardening.  This stuff spreads fast.
Okay, onto my collards. Ever seen your collards (or kale or any large leaf plant) wilt like this in the middle of the day and you know they don’t need water? 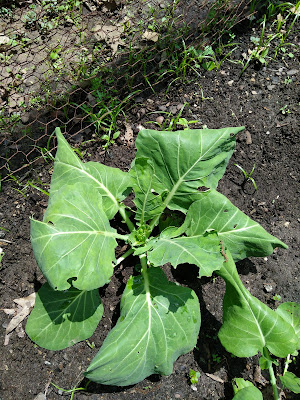