Hello garden gals and guys!!! This post isn’t about my garden, but I thought you might find it interesting. As you may or may not know, I am very much into homesteading. This weekend, I added a new set of skills to my homesteading repertoire: butchering chickens.

Yup. I did it. It all started when a friend of mine (thanks, Lisa!!) asked me if I wanted some roosters to butcher since she couldn’t keep them because they were making too much noise. I hunt deer every year and thought this can’t be much different, so I reservedly said “ummm sure?”. After I said yes, I was a little nervous. I asked a friend about how to do it and he pointed toward a great video that explained the whole process (thanks, Blake!).

When Saturday arrived, butchering those roosters was all that was on my mind. I said many prayers asking God to guide me through the process. I felt really nervous about slitting the throat of a chicken. Here’s how it all went down. If you don’t want to see the process, scroll no further. It’s not gory, but I just don’t want any animal lovers to get upset with me.

The roosters arrived around 4:30. Here they are: 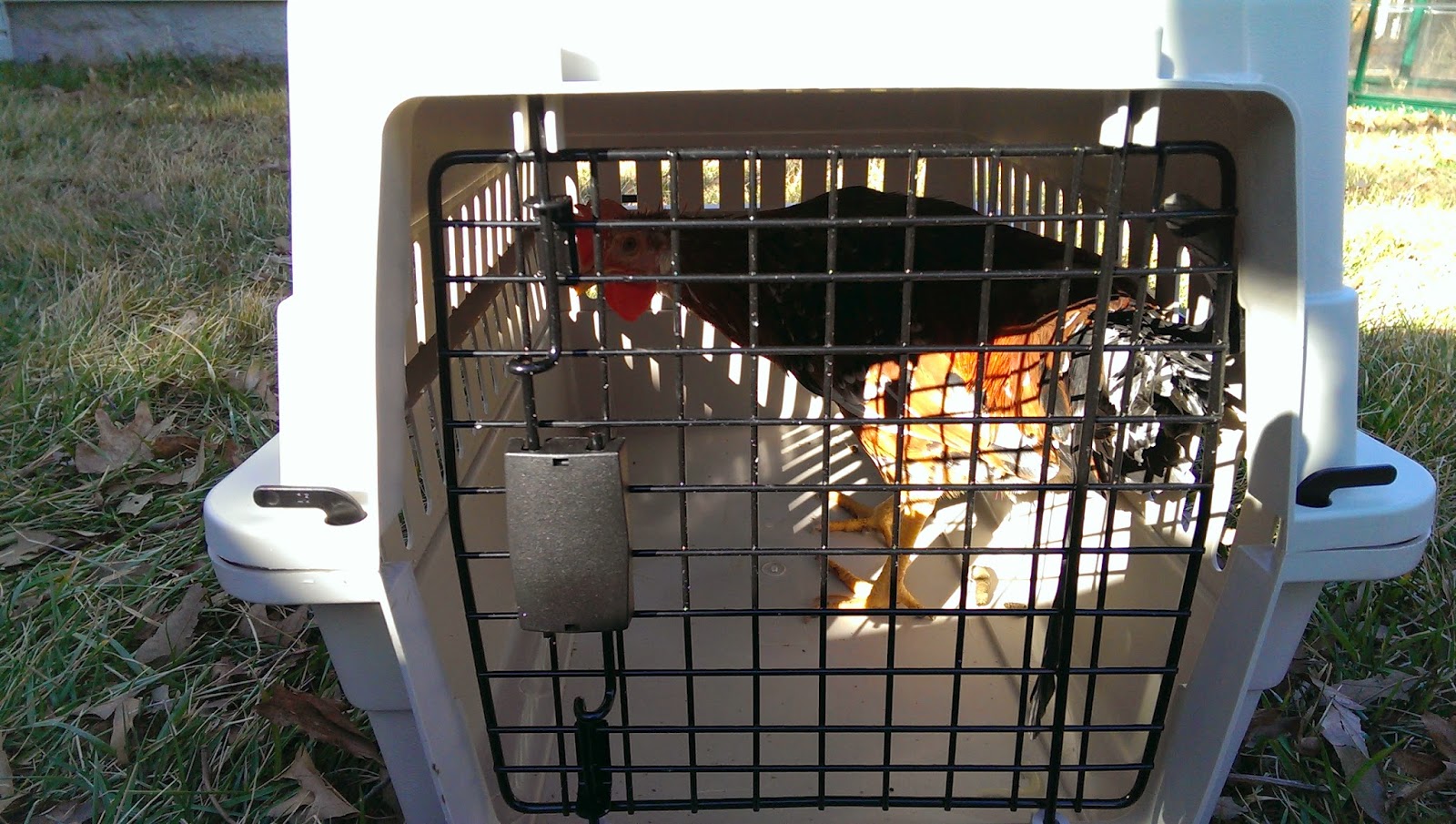 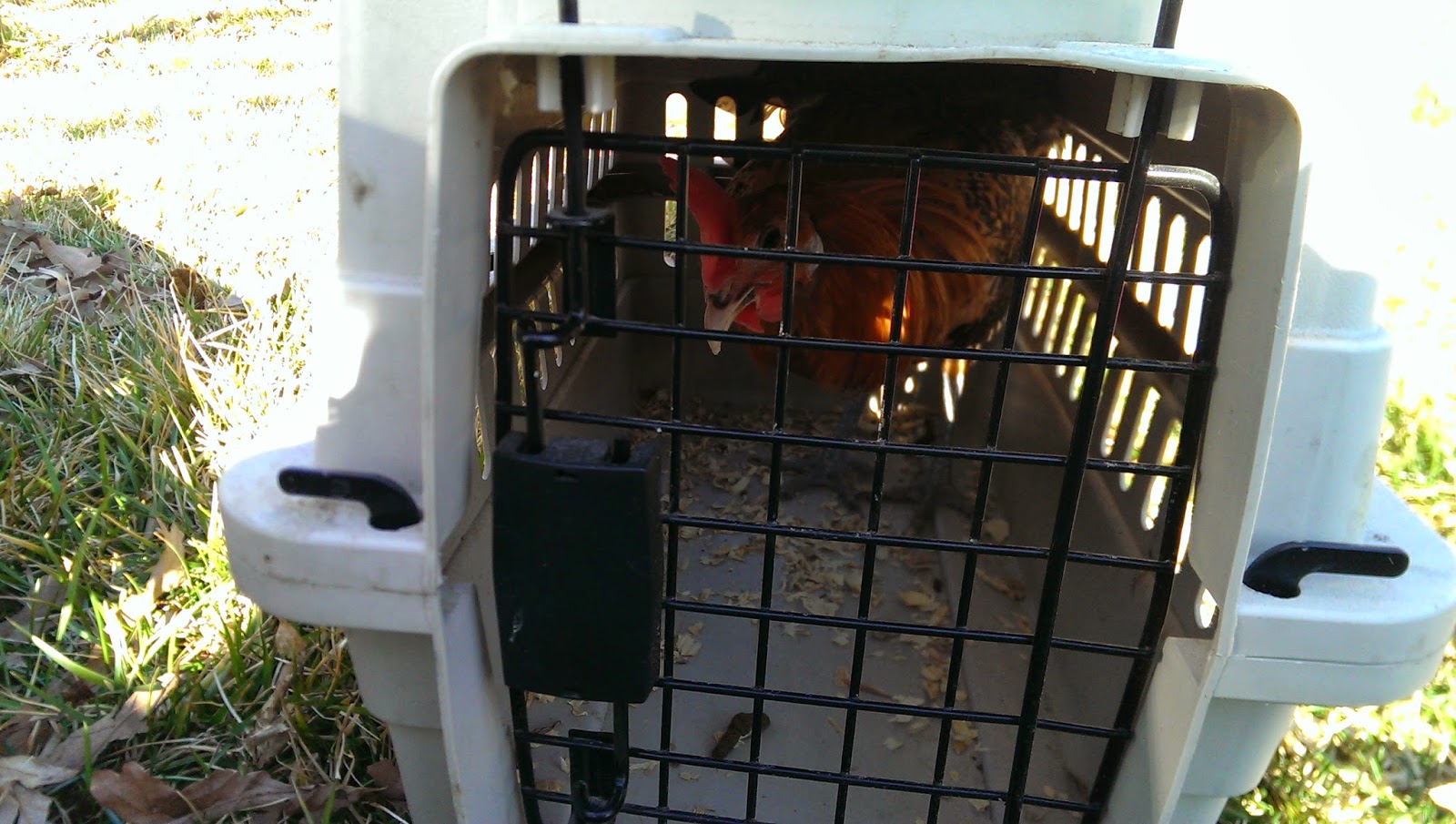 I started off believing I was going to gently pick one up and pet it until it was calm and then quickly slit its throat and allow the loss of life to take place. This is me trying to catch one of the roosters: 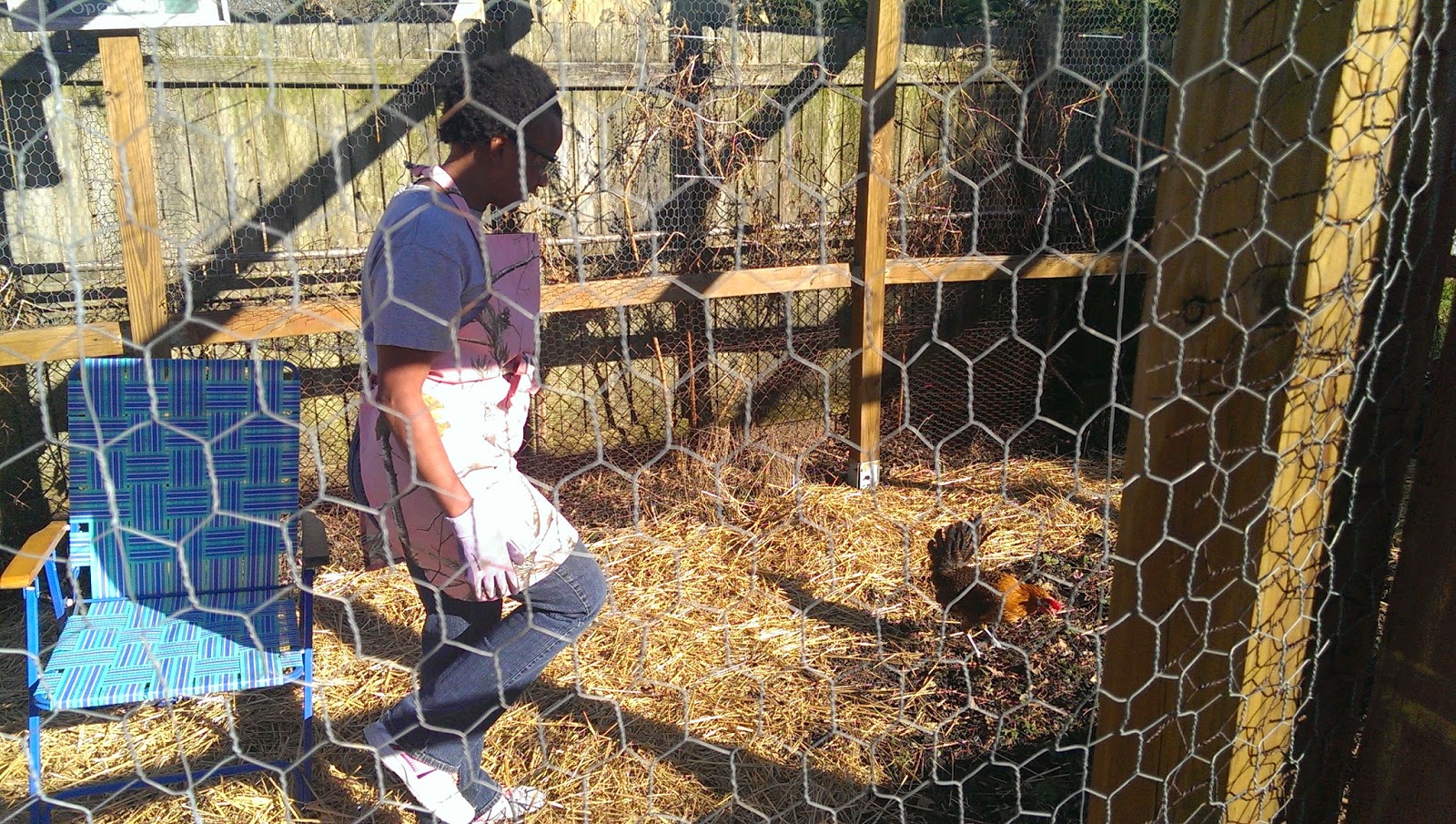 After about five  minutes of chasing the rooster, I had an idea: a pellet gun. I asked my husband if he would be willing to shoot them in the head. I figured it would be quick and painless. He agreed and got our youngest son’s Red Rider (don’t worry…he didn’t shoot his eye out): 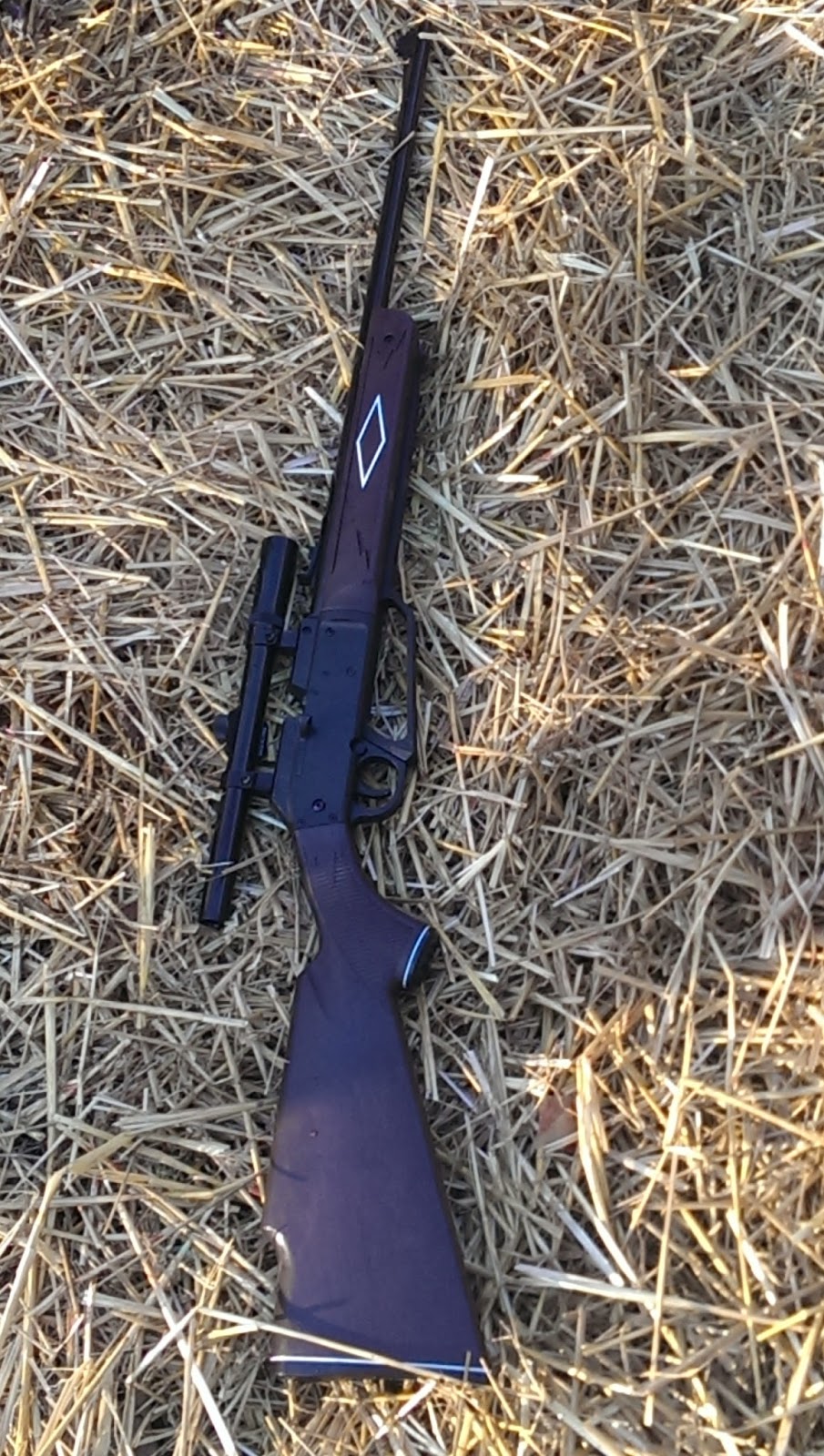 While the other rooster watched from the cage in horror (I felt bad for him)  my fearless hubby quickly did the dirty work. I cried. I didn’t like that part. But I was all in now whether I liked it or not. I had to toughen up.
After both of them were down, he grabbed them one at a time by the feet and I chopped the heads off. I couldn’t grab them because they would wiggle a little every time I tried to touch them and yes…I was a bit freaked out by that.
I hung them upside down to let the life source drain from them and I thanked them for giving their lives to give me food: 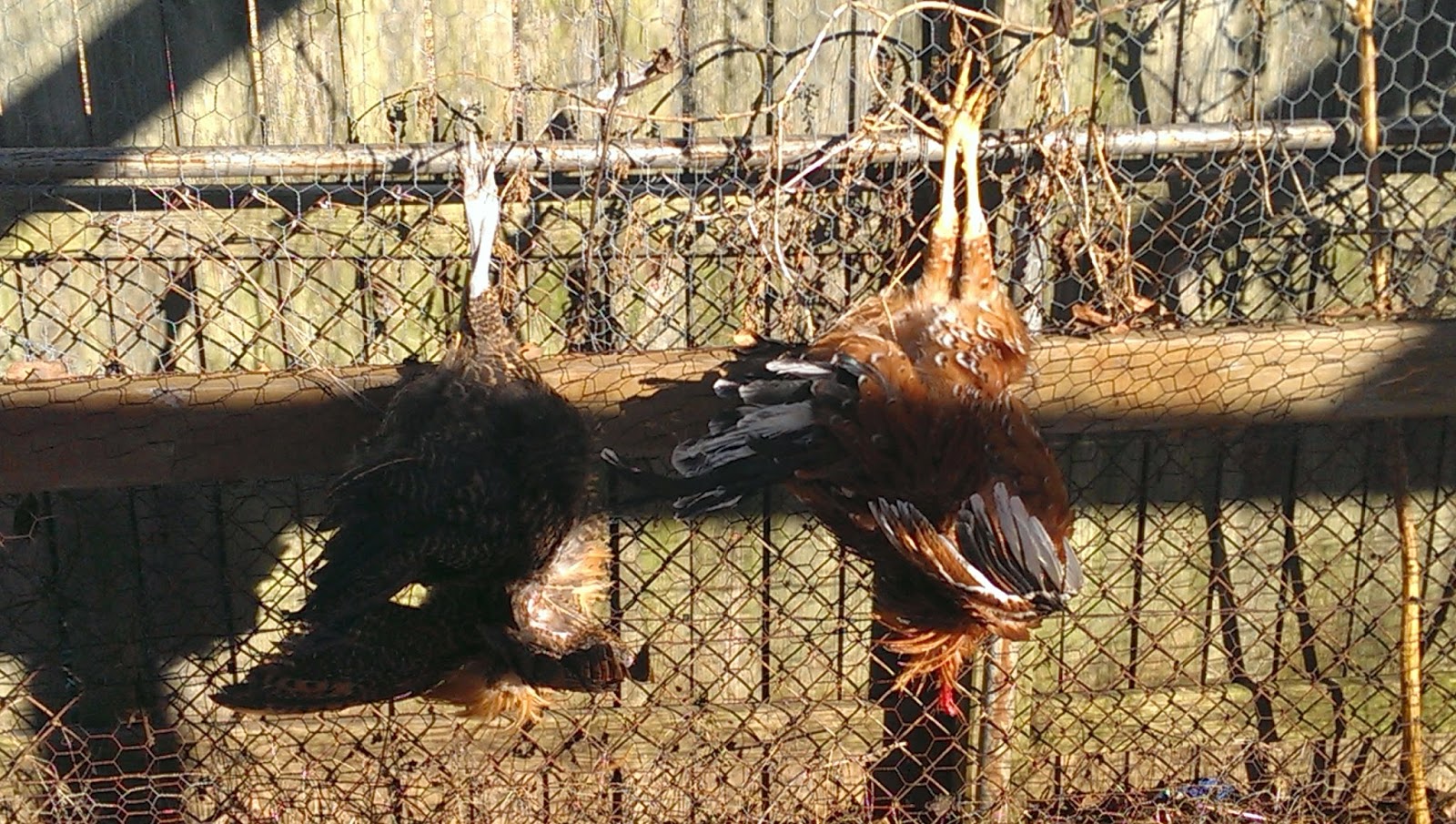 Hubby then brought me a pot of hot water (you don’t want boiling hot…just hot enough). I dipped the roosters one at time into the hot water and then removed their feathers (this was not my favorite part): 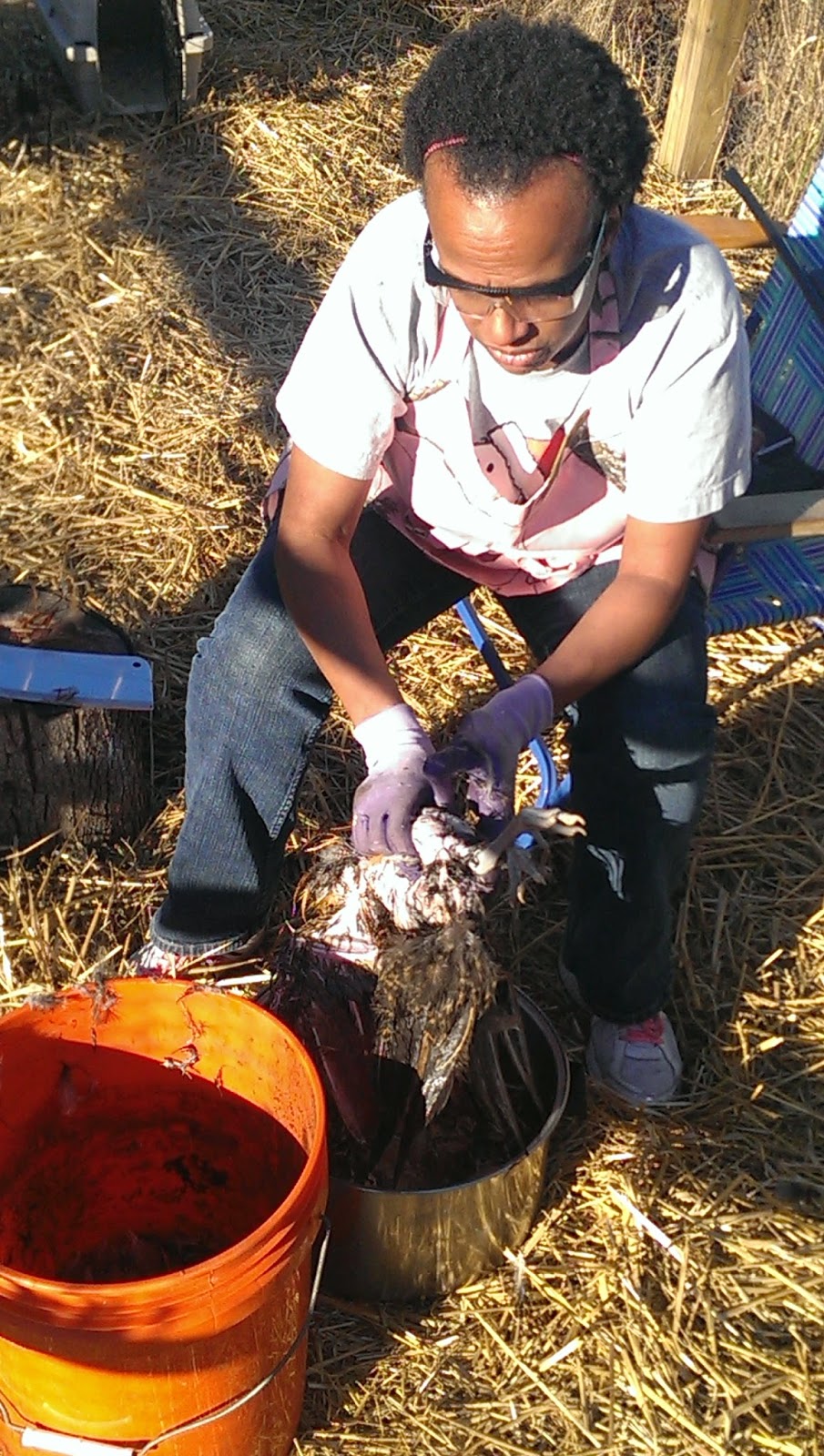 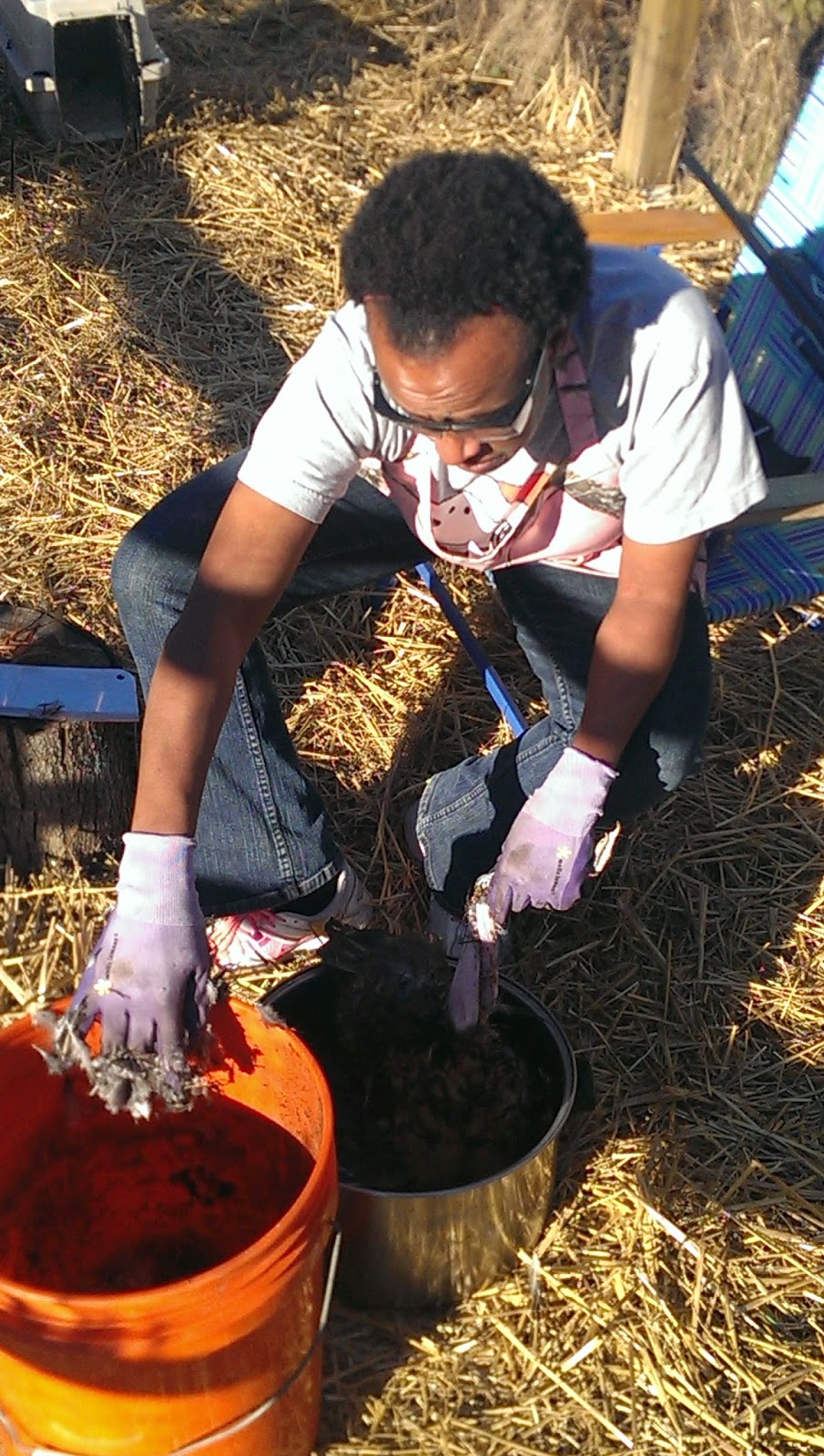 After I removed the feathers, I took them in the house to get the smaller feathers off and gut them (stinky!). 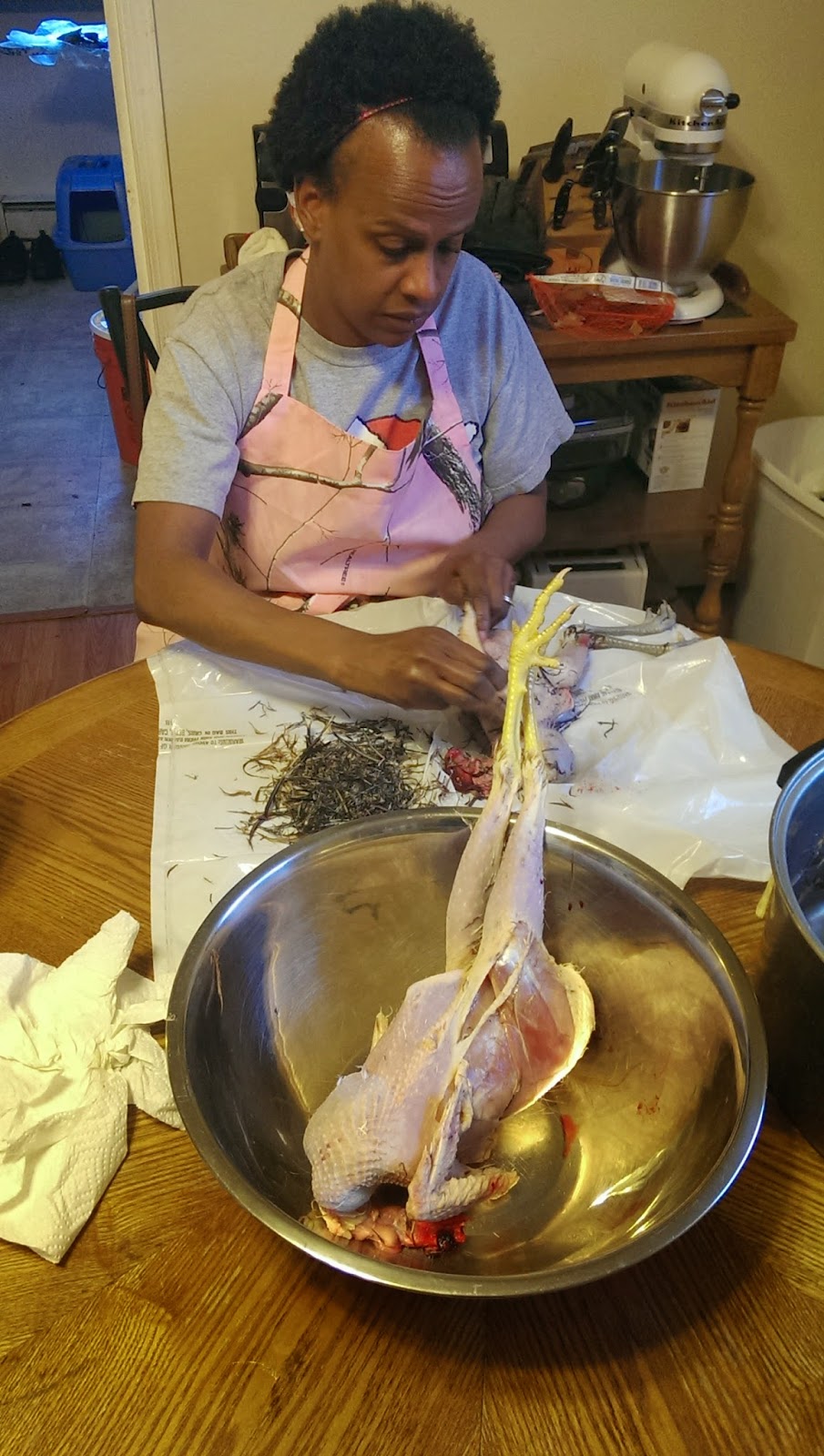 Chickens have these really fine hairs under their feathers that let them know what direction their feathers are going in. We ran a torch over those hairs very lightly to burn them off without cooking the chicken. But then I decided to just skin the roosters since they were only being used for stew (they are too small to fry or bake). But hey, at least I had the experience of removing feathers.
This is what they looked like after it was all said and done: 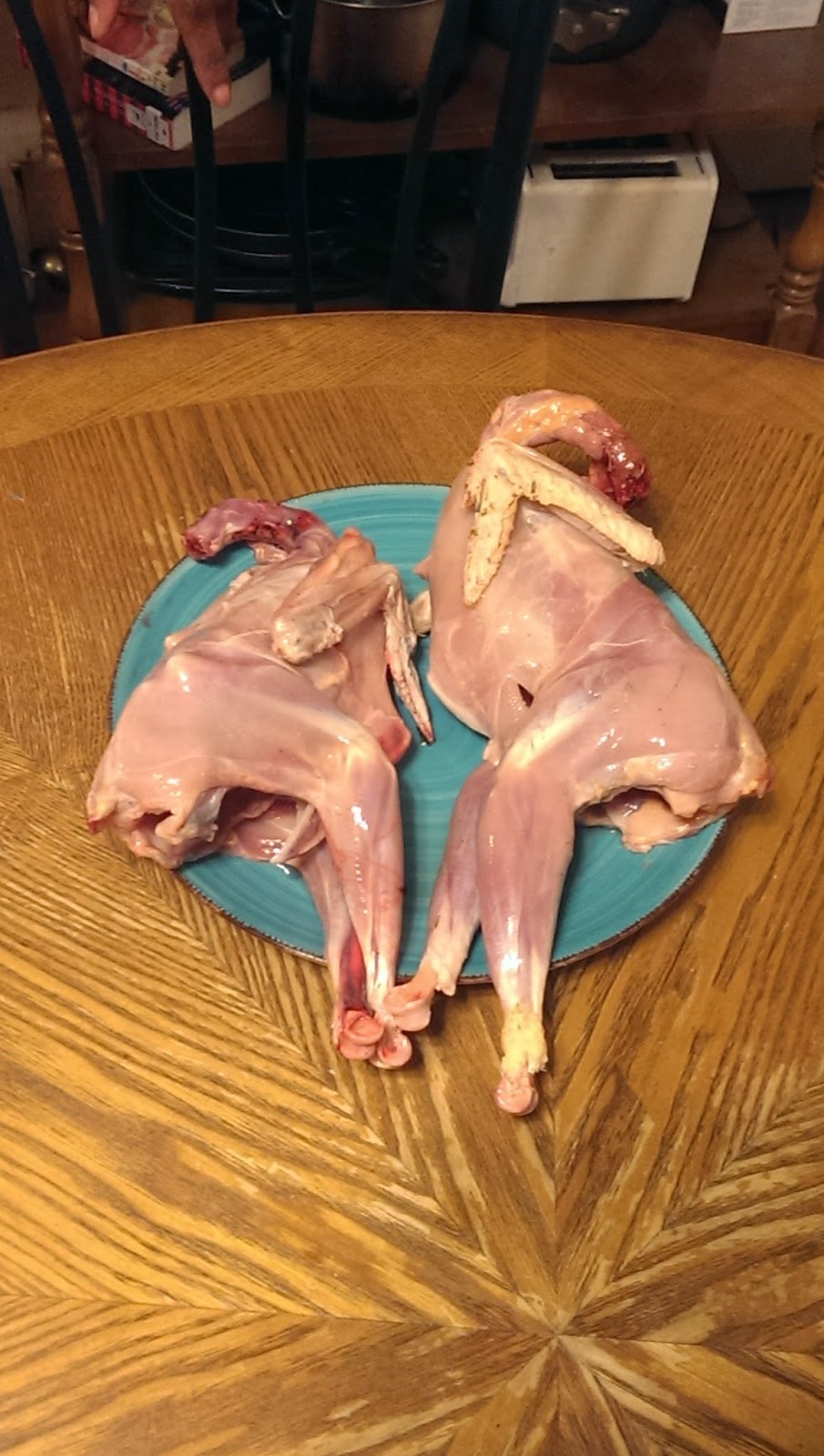 As I write this, one of them is simmering in a nice pot of homemade chicken soup that hubby is preparing for dinner.
I went back out to my garden to clean up. I looked at the empty cages and the meat cleaver I used. I felt a little sad, but also felt a humble sense of accomplishment at the fact that I just  provided food for my family. 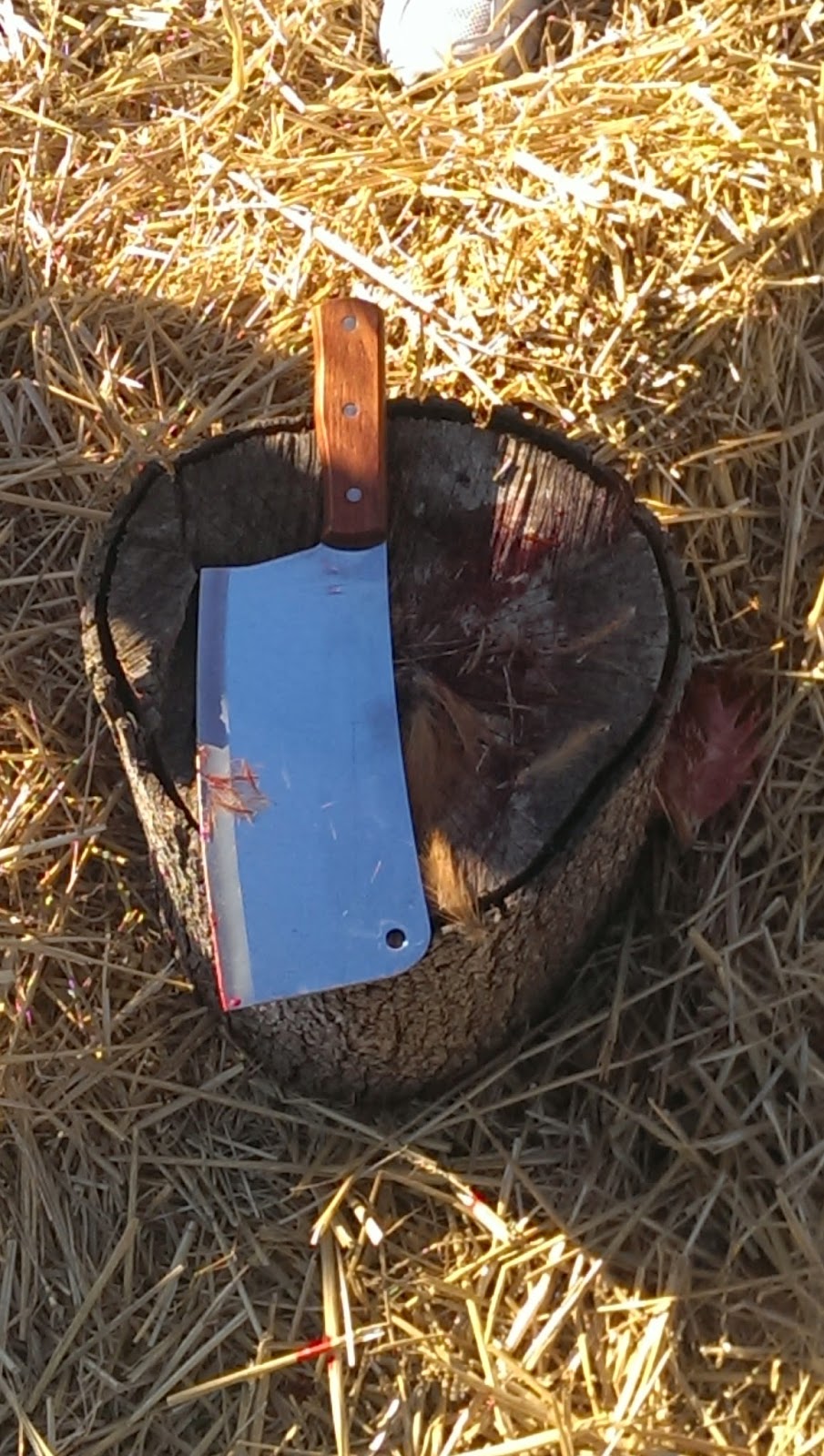 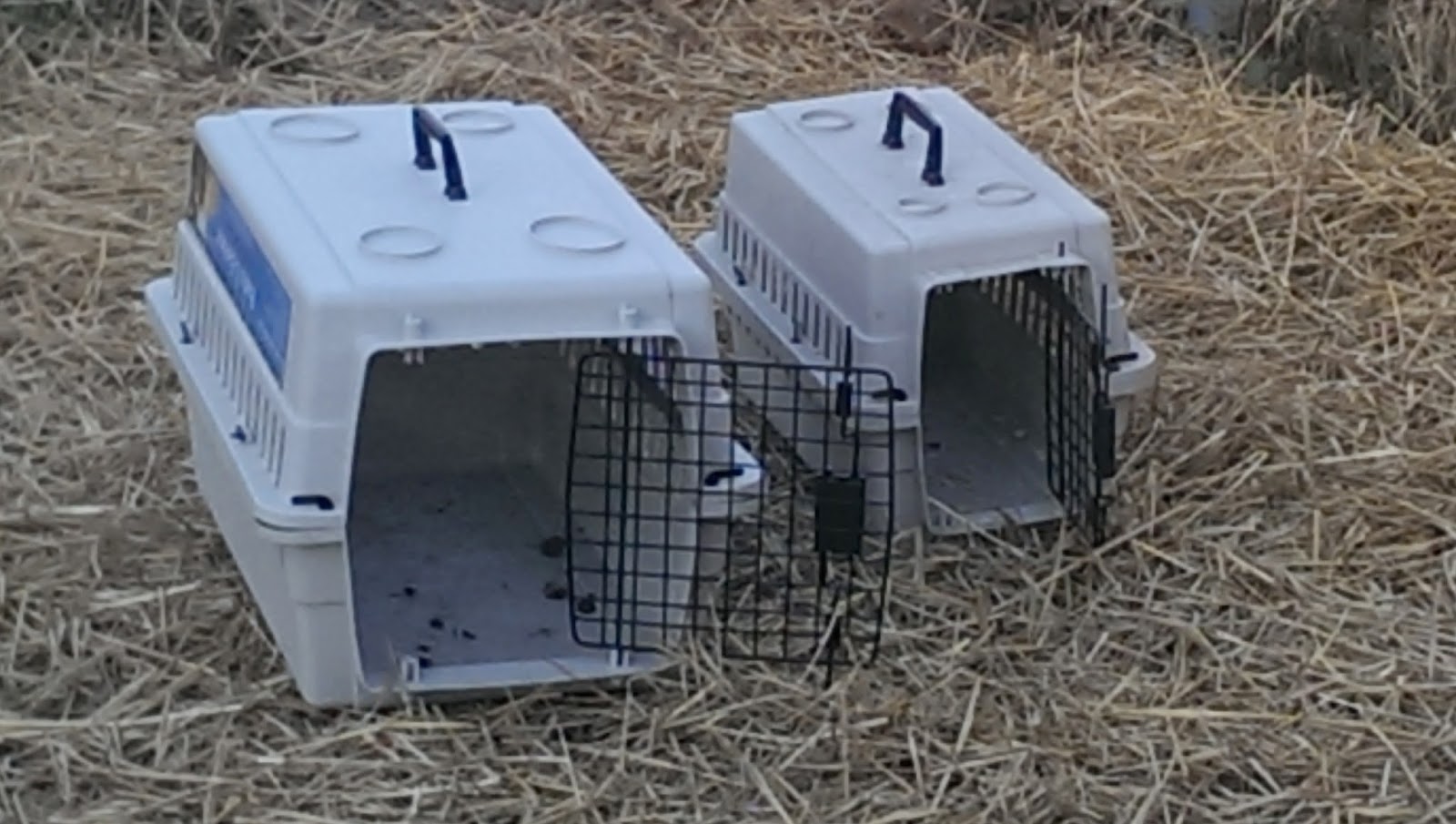 This was me after the whole experience. I look a little pensive. Taking the life of an animal is not my favorite thing, but it continues to give me a great respect for the food chain and where I am on it. 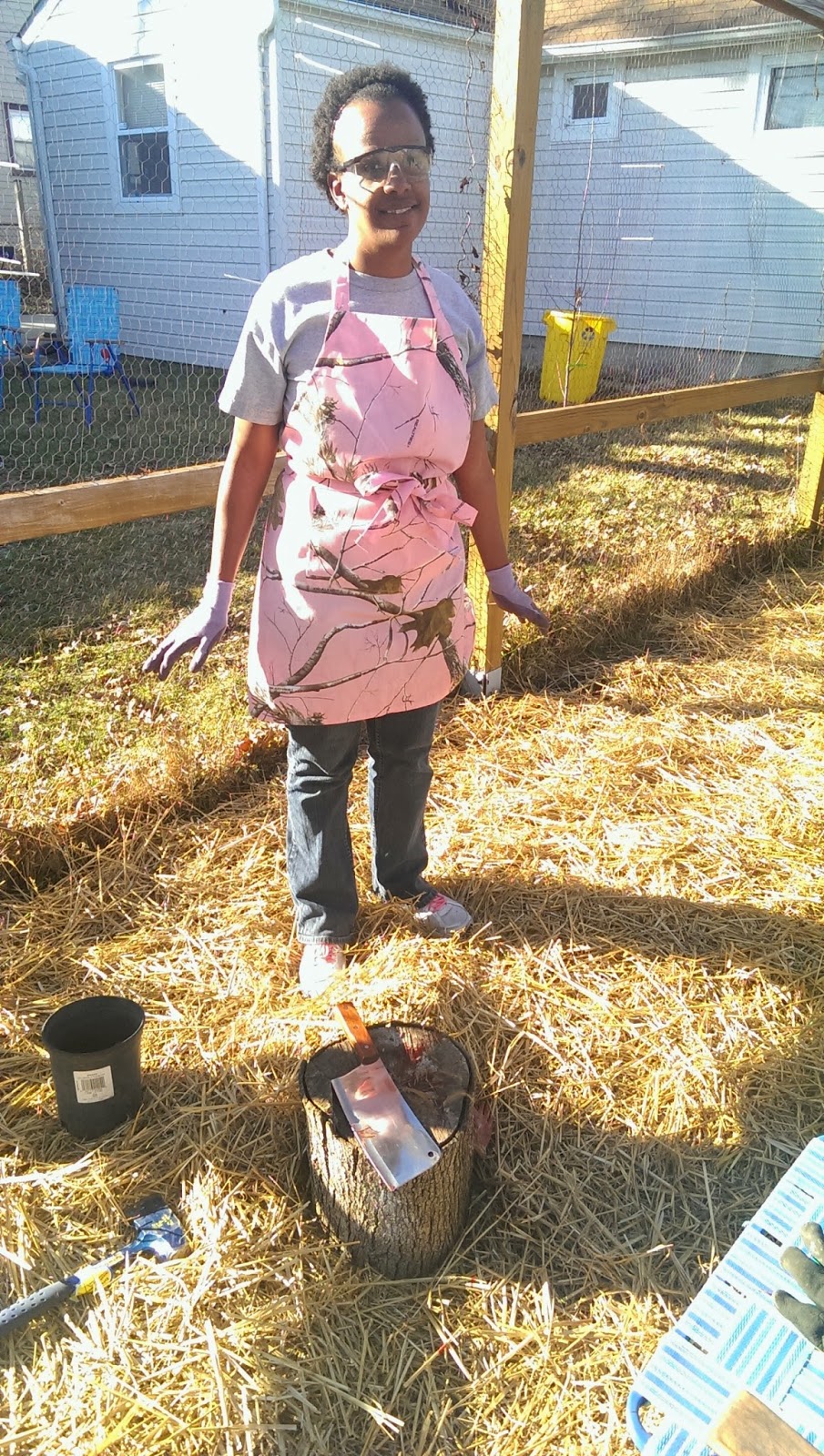 So….that’s it! I learned a lot. One thing that hubby and I decided after this is that we plan to act on one of our farming goals: to have our own chickens. I plan to save up and buy a small coop to put within my garden cage and have about four hens. We’ll start with having them for eggs and when they are too old to lay we will harvest for food (and they’ll also solve any bug problems I have in my garden and add fertilizer to my soil…now that’s a win-win!!)
If you have any questions, feel free to leave them in a comment! I hope you enjoyed reading about my new homesteading adventure!
Until next time garden gals and guys…..
Happy gardening!!