The Joys and Pains of Gardening

This weekend was a relaxing one.  Well, mostly.

I was out gardening early in the morning getting chores done before the sun got too high in the sky.  The chickens were running. The birds were chirping.  Total happy place moment.

Hubby and I were chatting, and he asked me why I stopped composting.  I explained that I got lazy with it because tending the gardens, the chickens, and my other duties keeps me busy.

He convinced me to get started with it again so I took the water hose and opened one bin to wet the dried stuff in the bin and kick-start the composting process.

That’s when it happened.

A wasp came out of the bin and flew straight at me.  He was ANGRY.  He stung my index finger.

I let out a panicked, pain-filled screech and threw down the hose.

He got me four, maybe five more times, on the side of my head.

It disoriented me.  I screamed and moved away so fast I ran right out of my shoes (which I didn’t realize until later).

My husband came running to my aid.  The chickens squawked and flapped their wings and ran in circles and tried to figure out whose butt they needed to kick.  My chickens are gangsta!

The pain was so intense I couldn’t stop myself from crying.

Hubby put ice on my head and gave me a Benadryl to keep me from looking like I got in a fight with Mike Tyson.

We made a baking soda paste and applied it to the stings. 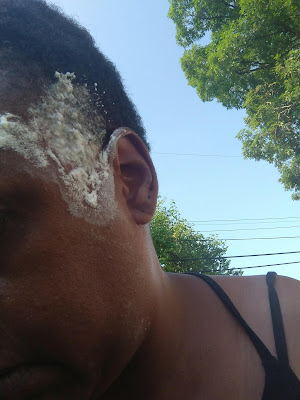 I stayed outside with the chickens to let them run before it got too hot.  Rosa sat watch over me.  She’s saying “let them try it again.”  She doesn’t play. 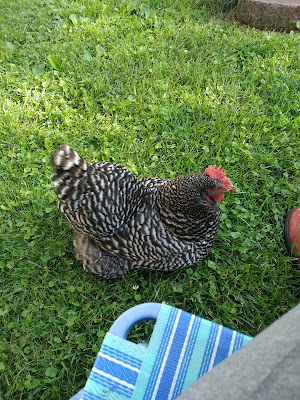 Hubby and my next-door neighbor sprayed inside the bin with wasp and hornet spray.  I’m waiting a week to let them die and then we’re getting rid of the bin.  I still have a bigger one in my garden that has finished compost sans the wasps.
(Side note: later that evening hubby found four more stings on me.  That’s when we realized I got swarmed.)

But The Day Got Better

Ever had a Georgia peach??
Well, part of my plans for the weekend included getting a box of them.
The Georgia Peach truck brings peaches from Dickey Farms to various locations throughout Pennsylvania, Maryland, and Virginia.  It’s the oldest peach packing facility in Georgia!   You can see where they’ll be next here.
Their schedule listed my local farm and garden center as their next stop at 2pm.  I waited all week for this.  Stings or not, I was going.
I got there ten minutes early.  Sweat ran down my back and forehead.  The temperature in my car said 96 degrees. My head was throbbing, but I didn’t care.
The peach truck arrived and a large crowd of folks started swarming the truck like bees (oh gosh…did I say bees…bad choice of words): 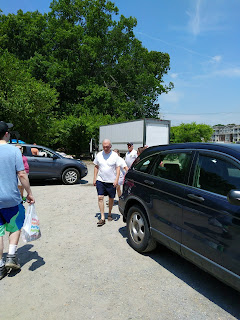 They opened the back of the truck and began to set out the boxes of yummy goodness: 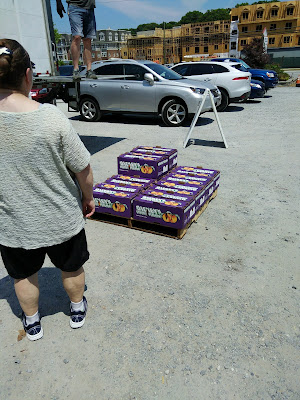 The line behind me was huge.  I wanted to take a picture, but those folks looked mean.  People mumbled about the heat while he set up his tent: 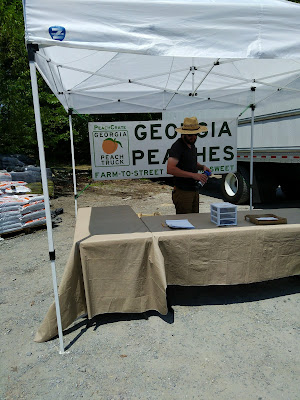 When he was finished, I handed him my money, took my box, and ran.  He said he had enough peaches for everybody there but I wasn’t taking any chances!
I got home and tried one.  It was cold and SWEET and SO JUICY!!! 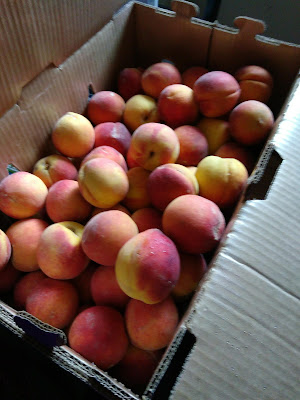 I almost forgot about how much pain my head and finger were in while I ate one.  It reminded me of the peaches I used to eat from my maternal grandpa’s peach tree when I was a kid.
And the best part? The farm is located near Macon, Georgia, where my (paternal) Grandma Mattie was from!
So I guess these peaches were my grandparents’ way of kissing my boo-boos.
Such is the life of a farm girl.  Now I’m gonna make some peach cobbler and then slice and freeze the rest.  And maybe make some peach chutney.
Until next time garden gals and guys…
Happy farming!