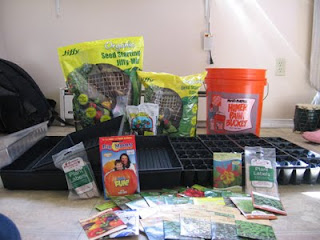 OK, I know it’s only been one day since I last posted, but I started my seeds and wanted to share! First, I gathered all the supplies I would need: bucket to mix seed starting mix, plant markers, plant trays, seeds, seed starting mix and a little bit of worm castings to give my seeds a little extra food.

My adventure began by pouring the seed starting mix into my bucket and then adding some water. I added little bits at a time, mixing as I went, until the soil mix was the consistency of a damp sponge. When you squeeze it in your hand, it should hold together in a ball but crumble easily and no water should drain out of it–see a damp sponge. Once it’s all mixed up, put it in your planting trays. I bought some inexpensive ones from Anne Arundel County Farmer’s Co-op. Do not pack the soil down. Remember, you want to leave air in there for those soon-to-be baby roots to be able to grow.

The next thing I did was take plant labels and write the names of my seeds. I stuck them in each tray BEFORE planting my seeds (I don’t trust my mind enough to remember what goes where). Once that was done, I followed the instructions on the seed packets, planting two or three seeds per cell. I have three trays like this one now full of seeds. I put the lids on them to seal in moisture and watered them from the bottom of the tray. Now here’s the trick. Forget about putting these trays in that sunny window sill. No, no, no! The temperature fluctuates too much and dips down below 50 degrees at night. 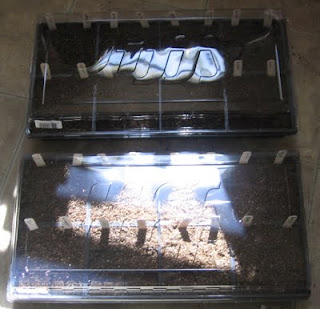 Remember seedlings need heat. So place them on a heat mat, or if you don’t have one, the top of your refrigerator will do. Once you see sprouts, remove the lid, and place them under a grow light. I bought one from a seed catalog, but you can make your own with lights from your local garden center. Leave those babies under that light with no more than an inch between the seedling and the light. This makes for nice short, stocky seedlings which is what we want. This is why the windowsill is not a good place for them (besides the temperature fluctuations). If the light source is not close, your seedlings will become leggy (tall and thin) because they are trying so hard to reach for the light.

That’s it! You have started your seeds! The most important thing to remember is not to over water them. Feel the soil–oh go on and stick your finger down in there! Don’t be afraid. If it feels dry, then water. However, if you feel moisture in there, let them be. It’s okay to let the seedlings dry a little between waterings. If you water too much, your seedlings will die from a disease called damping off (more about that later).

Well, this is all for now folks! Stay tuned as I bring you more pictures of our sprouts! Come on, seeds!