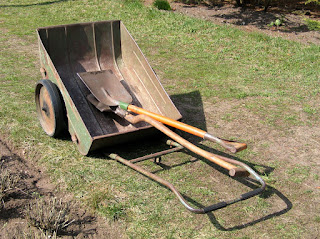 Yes garden gals and guys…the time has come for the growing season to end…at least outside (more on that later).

As I sit here awaiting Irene’s arrival (and not looking forward to it at all) I thought this would be a good time to revisit some of the happiest moments in this year’s growing season.

Of course the moment that wins the number one spot is being able to have a 5,000 square foot garden thanks to the generosity of Cathy, Tiff, Lauren and Kevin!

I loved, loved, loved having a 5,000 square foot garden to grow in. I finally had all the space I needed to grow an ample supply of food. A heartfelt thank you to all of your for allowing me to grow there and come and go as I pleased. It was such a wonderful experience and I am looking forward to growing there again next year, if you’ll have me!

Here was the garden in its humble beginning: 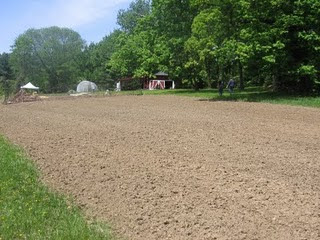 I won’t bother to show you what it looks like now…let’s just say it’s a hot mess…as my garden always seems to be at the end of a growing season.

Now, I’ve grown plenty of tomatoes and other veggies over the last six years, but I have to say the moment that runs a close second for me is…yup….my watermelons! This was the first year that I was able to grow those Georgia hams successfully! I think it is due to the fact that I was able to dedicate an entire patch to those melons and just let them spread out wherever they pleased! 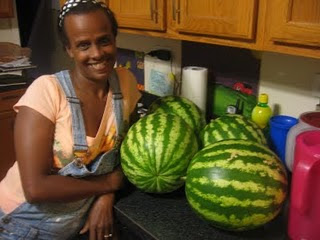 I harvest twelve of these beauties and every one was good, although the last four were smaller than the ones in the picture above.

My proudest moment is when my two youngest children wanted to start their own gardens “to be like momma”: 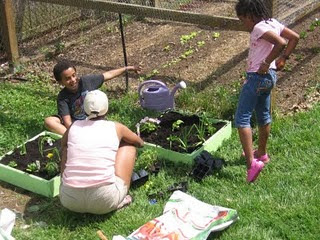 Every year I learn new things when I garden. This year, thanks to the New Farmer Trainee program, I learned first hand how much work goes into growing food for CSAs and farmer’s markets.

I can say now that I am well-prepared to take on the task of starting my own CSA. Everything has to be meticulously planned from the buying of seeds in January, to the careful planning of succession plantings to be sure that your crop doesn’t come in all at once. The things I learned “down on the farm” were invaluable and will be used throughout my lifetime.

Now, do I have any regrets? Yes. I should have invested in row covers for my peppers and cantaloupes. The stink bugs made minced meat out of those crops. Almost every bell pepper had large brown spots from where those varmints had done their damage.

The only other thing I think I would change is to grow about half of the tomato plants that I grew. You may remember that I had 130 of them! I think 65 would have been a better number. But there were a lot of delicious dishes made with those maters!!

I shall miss the homemade salsa, caprese, and taco salads!! Yeah…..you can buy store tomatoes, but unless they are local and vine-ripened they won’t taste the same.

Well, I think this is all for now garden gals and guys. But this isn’t farewell! I am currently reading on hydroponics and I think I am going to try an indoor garden experiment. Don’t worry…I’ll blog all about it!

I hope you all had as wonderful a summer and growing season as I did!!

Until next time garden gals and guys….