Hello garden gals and guys! Welcome back! At the beginning of the month, I posted about a new growing method that I am using. You can read it here if you missed it. I thought you might enjoy a little update on how things are growing.

I couldn’t be more pleased with this set up. I had two harvests of the biggest, most beautiful collards I have grown in the ten years I have been growing food. I was really impressed that I got this harvest because we have had such extreme heat rather early in the season. The collards have now been replaced with corn,which you may remember from the video I posted at the end of my last blog post.

Well, let me share some pictures with you of how the garden looks now.  The row where the orange bucket is have tomatoes and carrots. I actually had to cut back the cherry tomato plant because it was really getting crowded. Since air circulation with tomato plants is really important, and my garden space is limited, I had to sacrifice a few branches. The blue buckets used to be the collards. It will be interesting to see how the corn does now. So far it has grown quite a bit and they have only been planted for about a week or so. 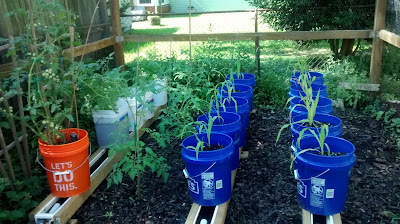 Here are my tomatoes and cucumbers. You may remember that they looked like this initially: 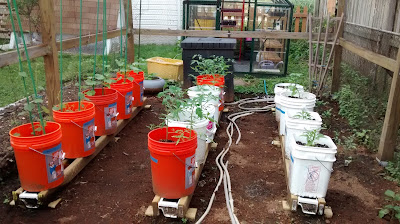 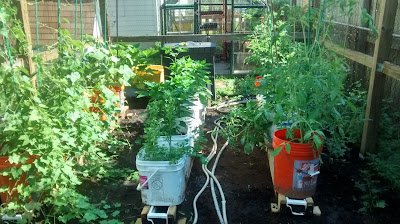 You may notice that the tomato plants are not in the middle rain gutter anymore. That’s part of the beauty of this setup that I really love. The cucumbers and the tomatoes were really getting quite bushy and crowding each other. So I took the peppers and the one carrot plant that were on the right and switched them to the middle gutters and put the tomatoes to the far right. Now everyone has enough space. If the plants were in the ground, I would not have been able to do that.
Here are some more garden pictures for you. This was my first harvest of cucumbers. I plan on making some relish with this batch and maybe a few dill pickles if I have enough left over after I make the relish. 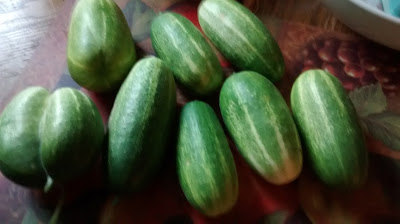 I finally see some red on my cherry tomatoes: 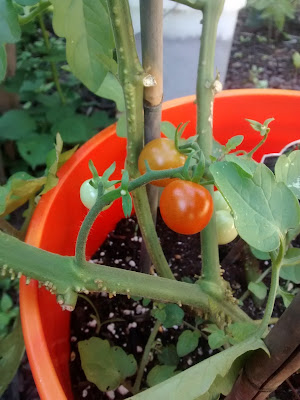 I think peppers are my most favorite thing to grow. I love catching pictures of them in their different stages of plant life. This is a Chinese Bullnose variety, which is a sweet pepper. 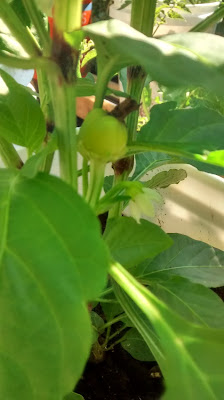 These are Mexican Gherkin cucumbers. They look like tiny watermelons. I will probably pickle these as well. They are only about an inch or so long right now. I had to try one before they were ready and I have to say they taste pretty good. They taste like a cucumber with a bit of a lemony flavor added on. 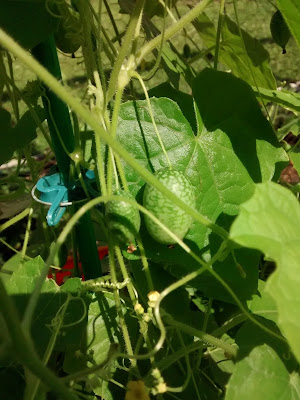 I have been regularly picking blackberries in small handfuls and they are SO delicious. 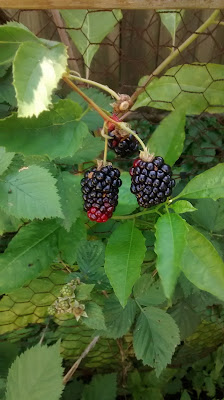 I finally noticed one lone zucchini on my huge zucchini plant. 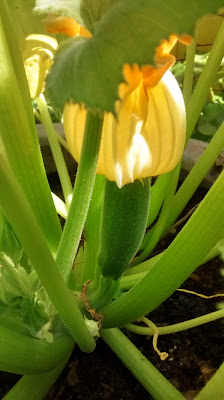 My apple tree is FULL of apples despite the little brown spots all over them. I haven’t been able to find out what is affecting the apples, but I still plan to eat them…I will just cut them open first to be sure I don’t get a mouth full of worm! 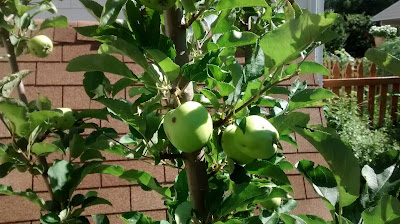 So, that’s it for now! Everything is doing really well and I really couldn’t be happier with my rain gutter grow system. Now if my tomatoes would just hurry up and grow and ripen, I would really be one happy garden gal!
Until next time garden gals and guys!
Happy gardening!