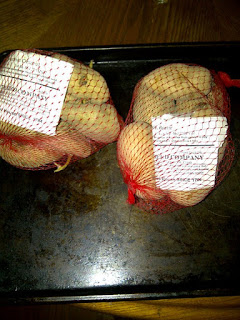 Hello Garden Gals and Guys! Yup! It’s potato planting time. Actually the weather has been so dry and warm, a lot of farmers have gotten their potatoes into the ground about three weeks ahead of schedule.
I promised I would post about how to plant them so here it goes! For the Maryland area, potatoes can be planted from March 15th to April 20th (but you can plant them as late as June). You can do a google search on planting potatoes to see when you can plant them if you are not in Maryland.
The potatoes that I have (pictured to your left) are two types: Bitje (a baking potato); and Austrian Crescent which is a fingerling potato (a small, skinny type of potato).
The first thing that I did before planting was to dig some small trenches in my garden about two or three days before I was ready to plant. I added a little lobster compost to the trench and worked it in.
Right after digging the trenches, I took my potatoes and sliced them up so that there was at least one “eye” (those sprouts that your potatoes get are called ‘eyes’) on each piece. I left them to dry on cookie sheets for about a day or two. Slicing them and letting them dry reduces the chance of them rotting once they are in the ground. 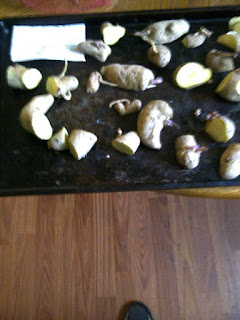 The potatoes pictured above are the fingerlings. The other photo of the baking potatoes was blurry (I REALLY need a new camera! My old blackberry doesn’t cooperate all the time!).
After two days, I took my potato cuttings and put them in their trenches, spacing them about 3 inches apart, and covered them with soil. Here they are after being placed in the trench: 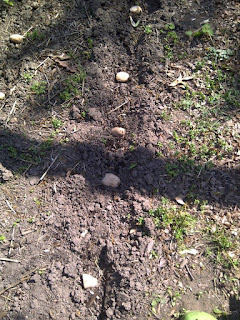 It’s a little hard to see but those things that look like rocks are the potatoes. Once you cover the potatoes, give them a little water and then the waiting comes. Now, don’t over water (or under water for that matter) them because if you do that can causes them to rot, crack or to form weird shapes! Just keep them evenly moist.
Once they have sprouted, you want to wait until the sprout reaches about eight inches and then hill up the soil around the sprout leaving about an inch or two sticking out. This step is very important! The potatoes will form in these mounds. As the stems continue to grow, continue to mound the soil up around the stems every so often.
Now, I know your next question is “DivaGardener, how do you know when the potatoes are ready?” Well, I’m glad you asked!
If you want to have some baby potatoes, you know those yummy delicious small ones, you can dig up the potatoes about two weeks after you see some pretty little white flowers open on the tops of the plants. If you want to wait until the potatoes are full size, then don’t dig them up until about two weeks after the plant itself dies back.
Don’t worry! I’ll be posting pictures as my spuds continue to grow!
And that’s really all there is to it! And there are lots of ways to grow potatoes, y’all! Some people grow them in bags, which I think is pretty neat! I just haven’t tried it yet.
Until next time, garden gals and guys!
Happy gardening!!!