Well, after three weekends of very hard work, the chicken coop is finally finished!! There are several people that I need to thank. First up is my hubby for coming up with the design, drawing the plans, and then doing all the heavy lifting, cutting, working (and reworking) of the plans. He truly has a gift for design. Whenever we ran into a snag, he would sit and think and come up with a solution.

I’d also like to thank my mother-in-law for helping us with the build the first weekend, and for the beautiful circular saw that she bought us. And last, but certainly not least, I’d like to thank my neighbor, Steve, for being so supportive and for bringing me lots of coffee to keep me going!

OK…now on to the pictures. The build began by laying the foundation using 4×4 posts. 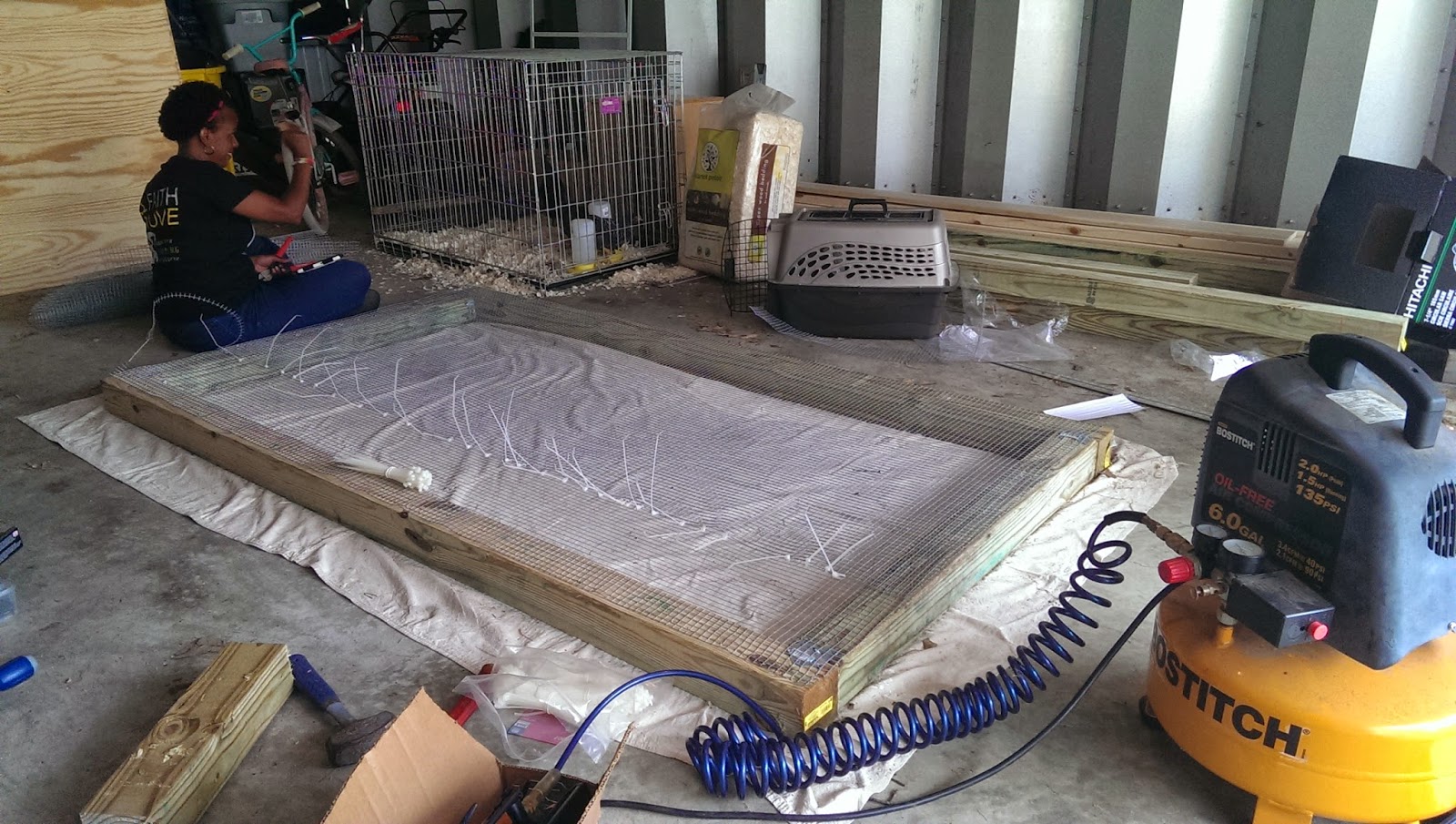 Then the a-frames were erected, again using 4×4 posts. 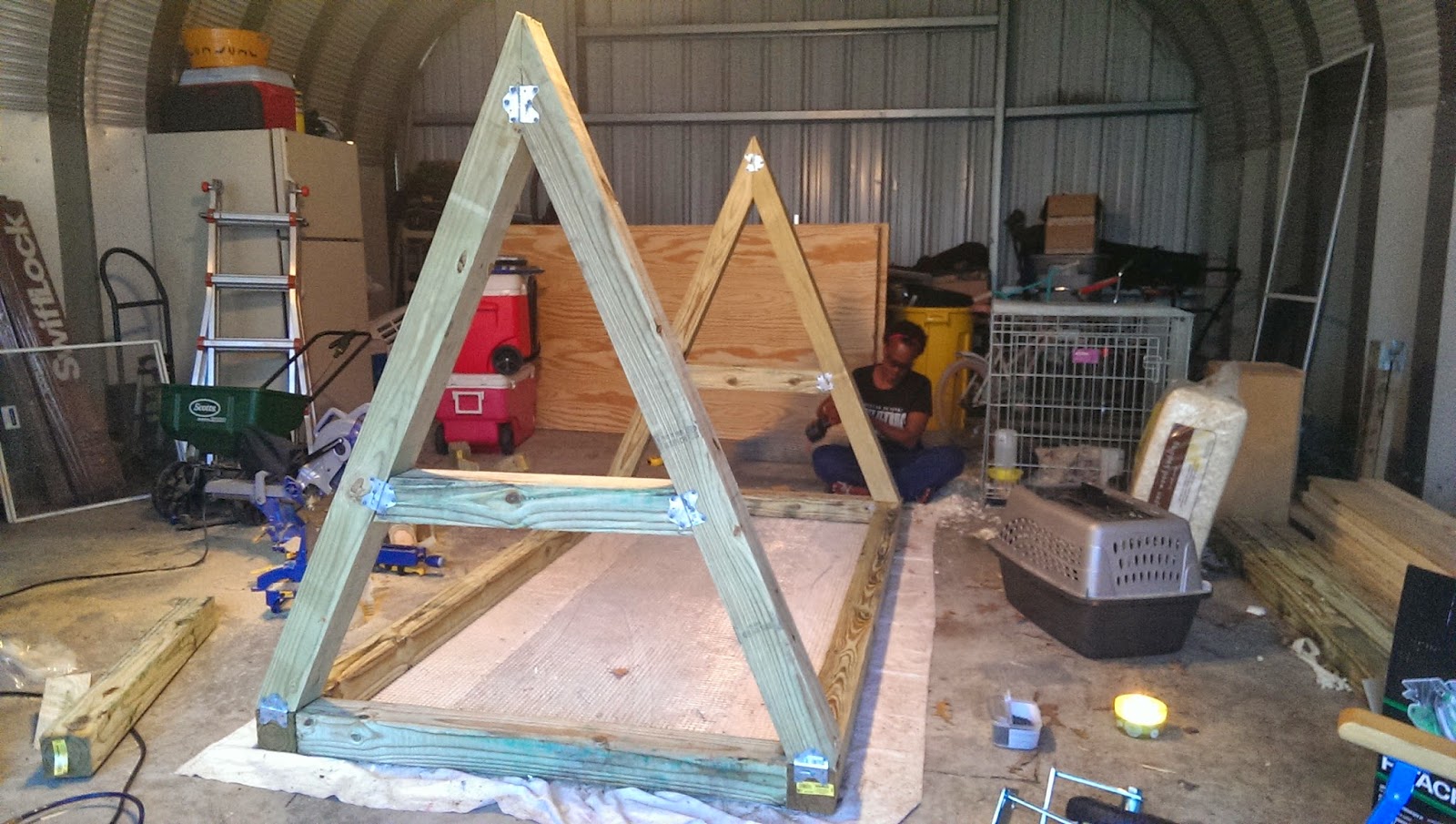 Next up were the supports for the floor in the middle of the a-frame. 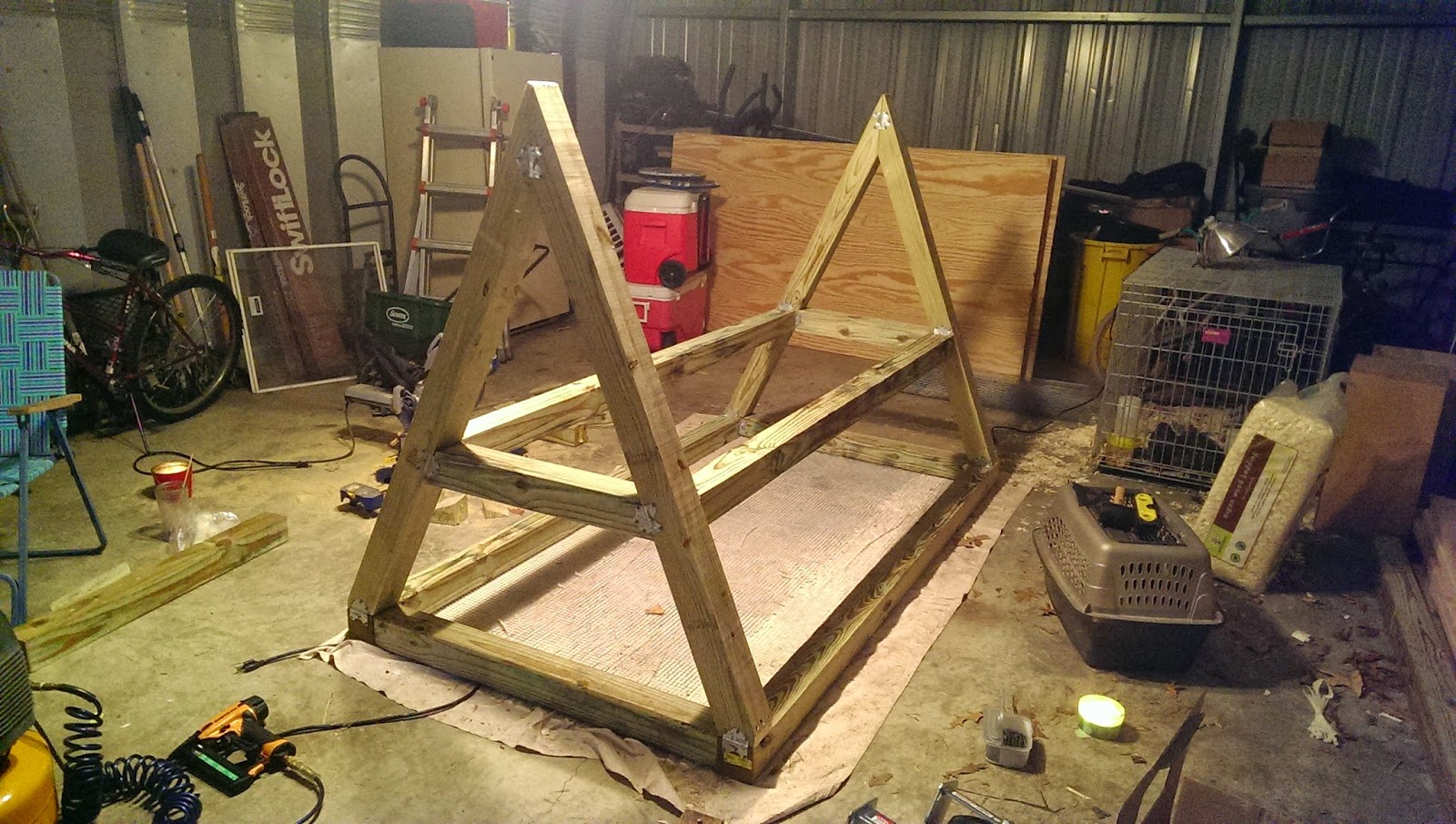 Then it took me, my eldest son, my hubby and myself to move the coop to the backyard (and if you’re wondering why we didn’t just start the build there…well it’s because we needed a nice flat surface to put the foundation together). My mother-in-law sanded down the rough edges where we cut the hole for the ladder so the Stinkerbelles can go up and down from the run to the coop as they please. 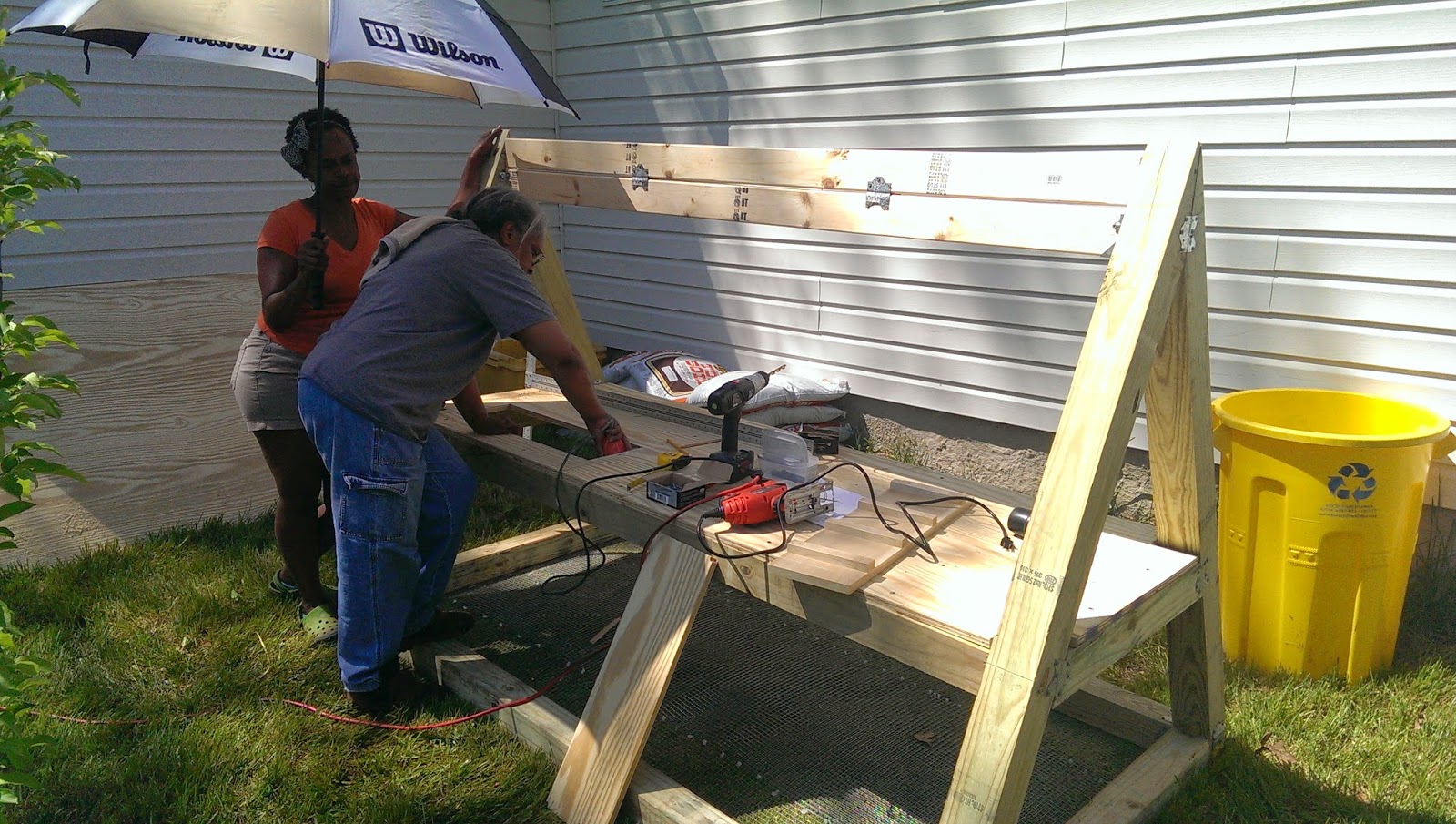 We also got the roof cut (made from plywood) and put on and the shingles. It was mighty hot that day so we put up the tent so hubby and I could be nice and cool. Again, I have to praise my hubby’s skills. He watched a video on how to install shingles. Studied it thoroughly…very thoroughly. I was a little nervous about how it would turn out but he did an amazing job. One side of the roof opens so that I can clean out the coop and change the bedding. 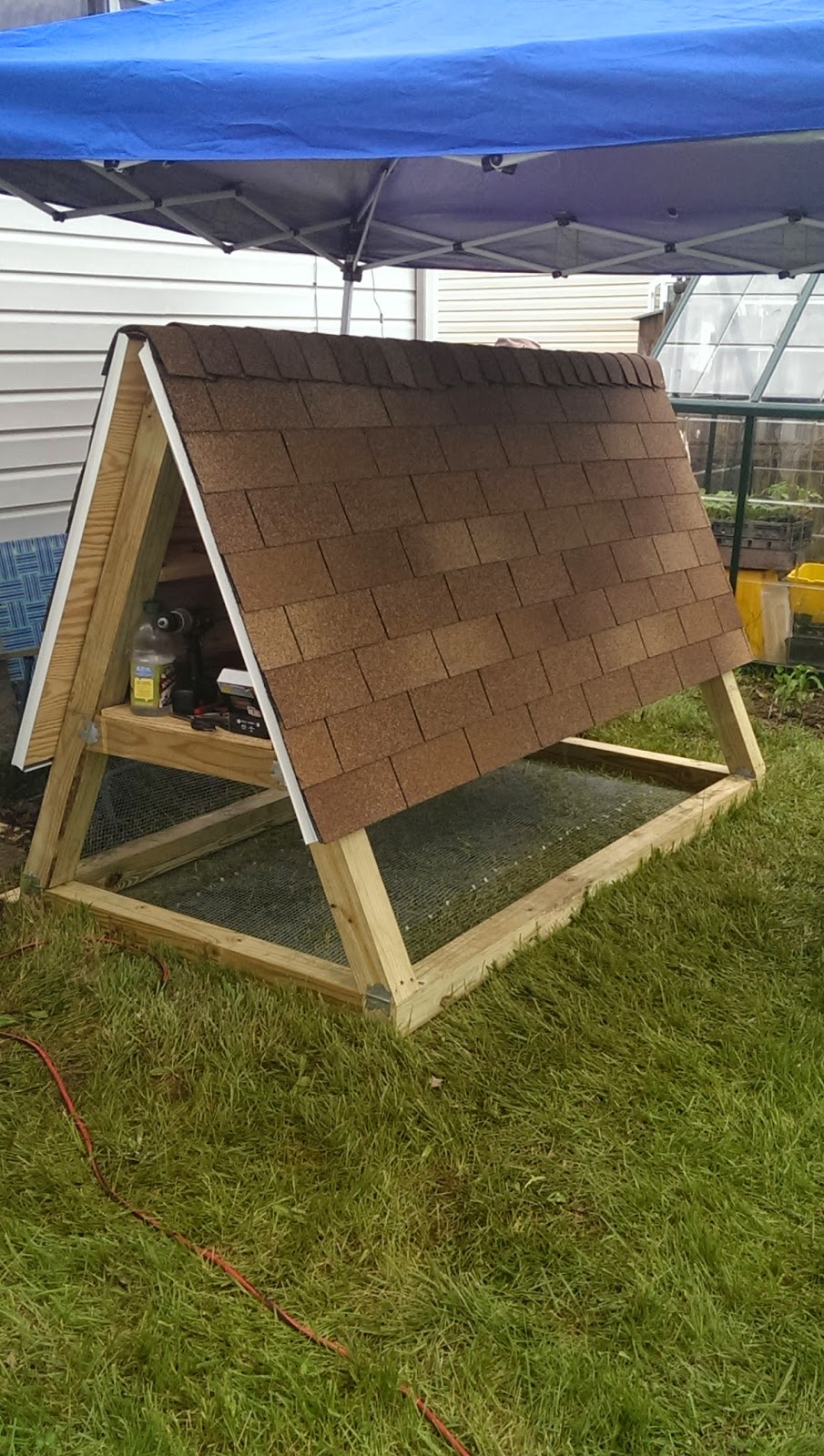 This a picture of the coop at the end of the first weekend of construction. It came together quite nicely. 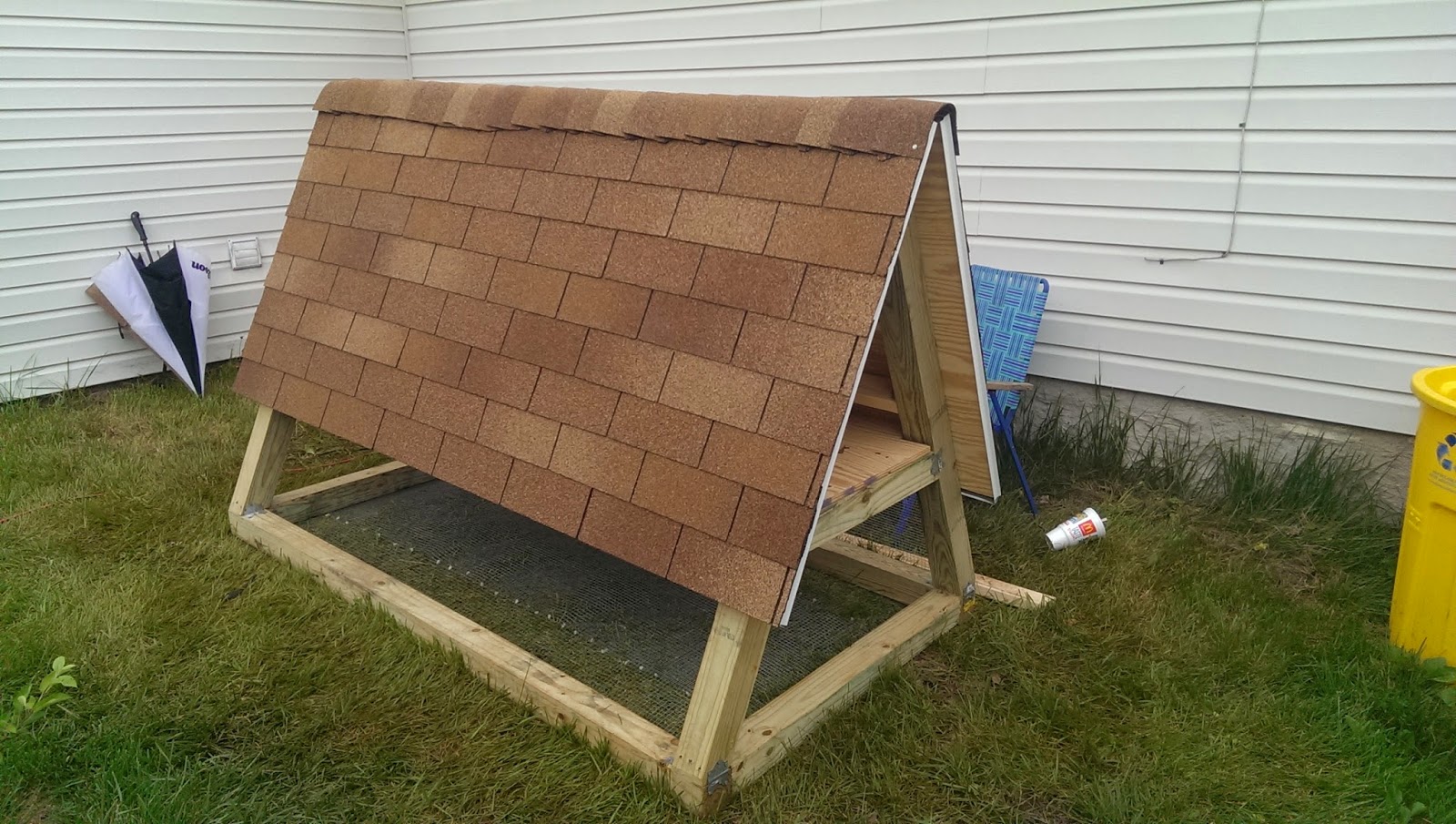 Here’s a view of what the coop looked like inside. 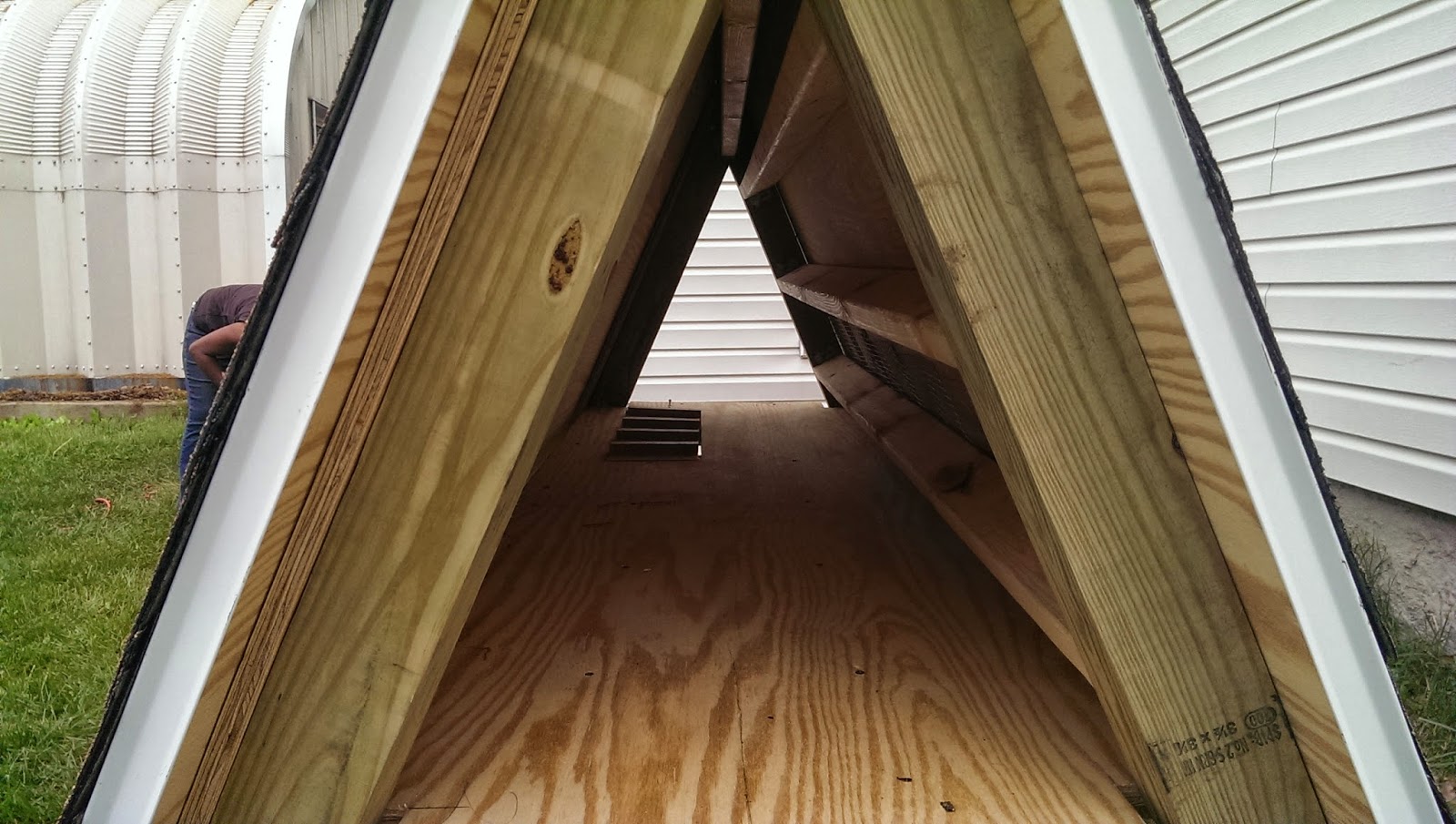 Week number two of construction. My daughter and I painted the posts, the underside of the roof and the side doors to protect the wood from moisture. We didn’t paint the inside of the coop. You can see how the roof lifts so that I can clean it out. Once the shingles were on, it was way too heavy for me to lift. But again, hubby came up with the idea to install struts and they work wonderfully (you’ll see them in later pictures)! 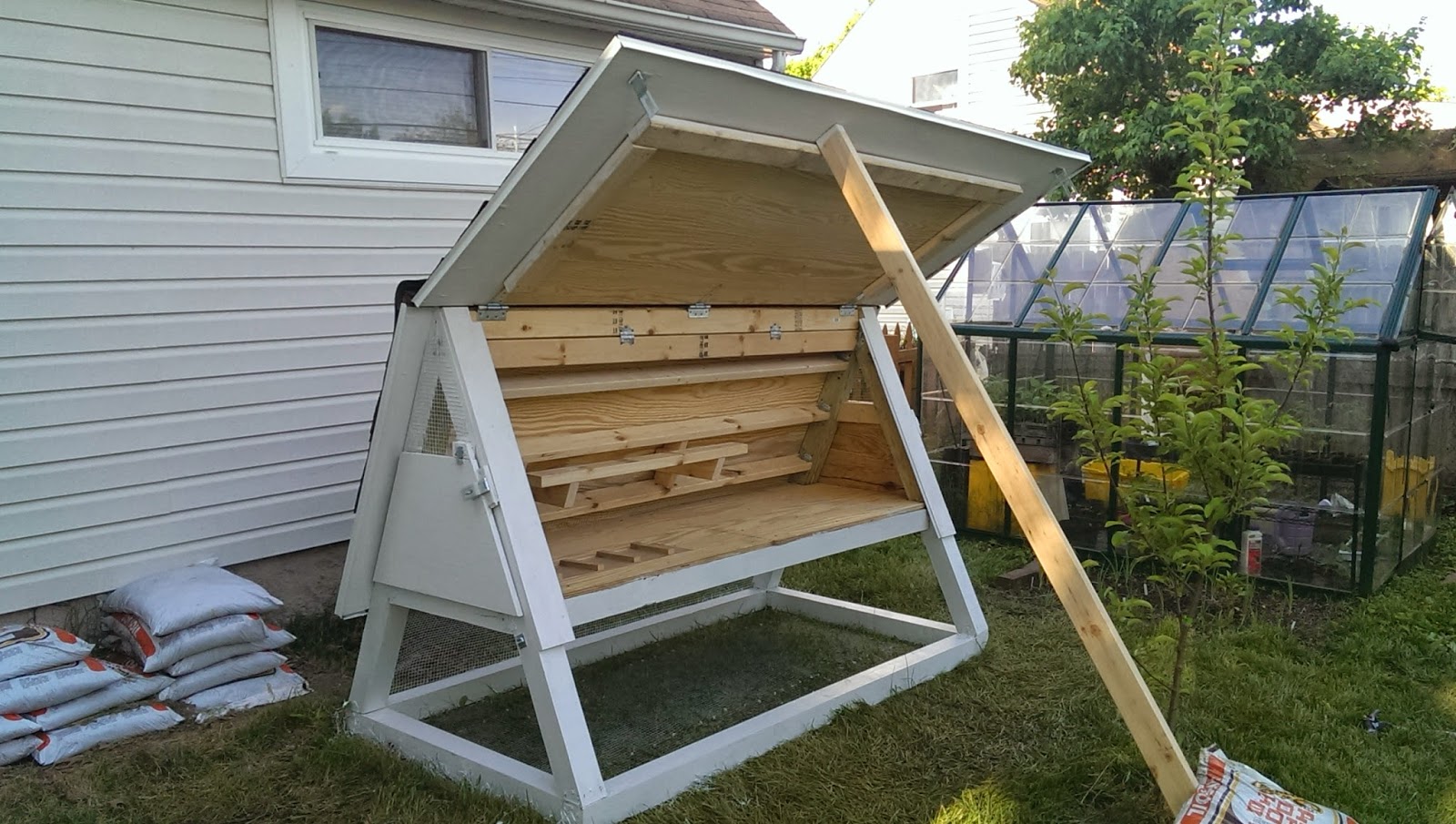 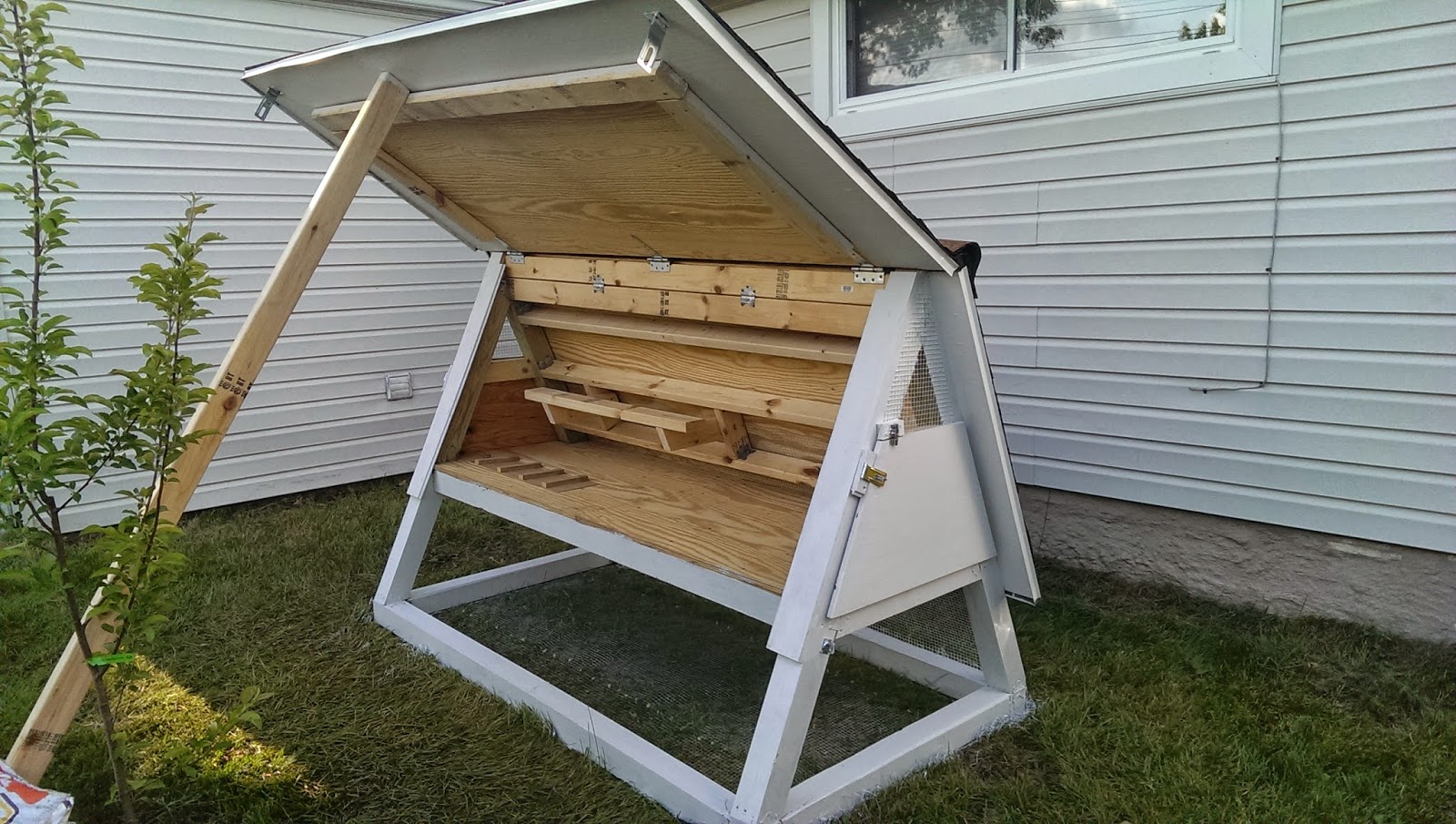 The end of weekend number two of construction. It was looking really great! 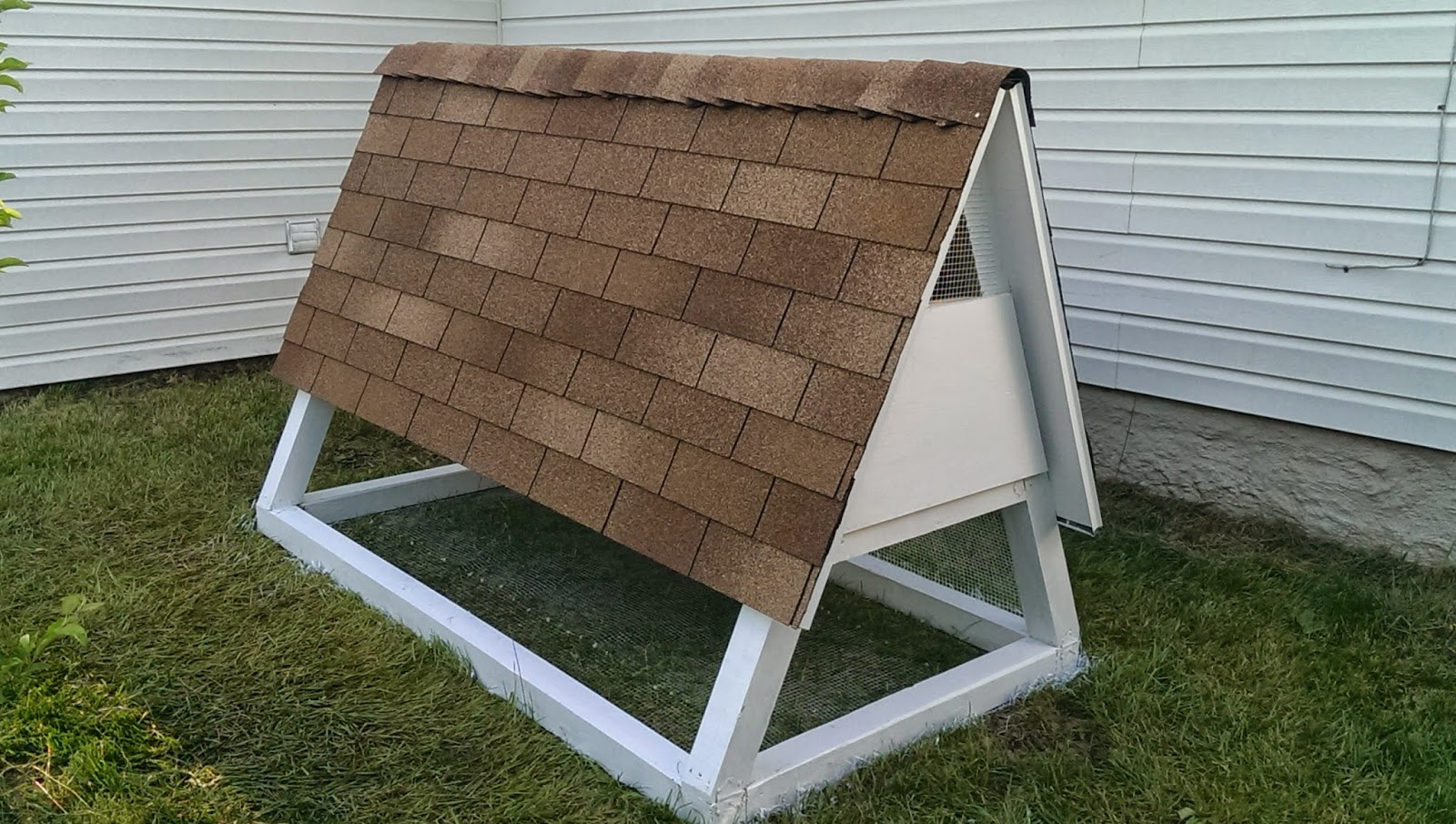 You can see the top doors that are on either side of the coop. This allows me easy access to the eggs (and to throw a few treats to my chickadees when the feelin’ hits me!). You can also see the hardware cloth that is above the doors. This allows for ventilation inside the coop. This was also installed under the base of the foundation and secured using a kabillion staples so that no rodents can burrow their way into the coop. We also used it to close in the run under the coop. 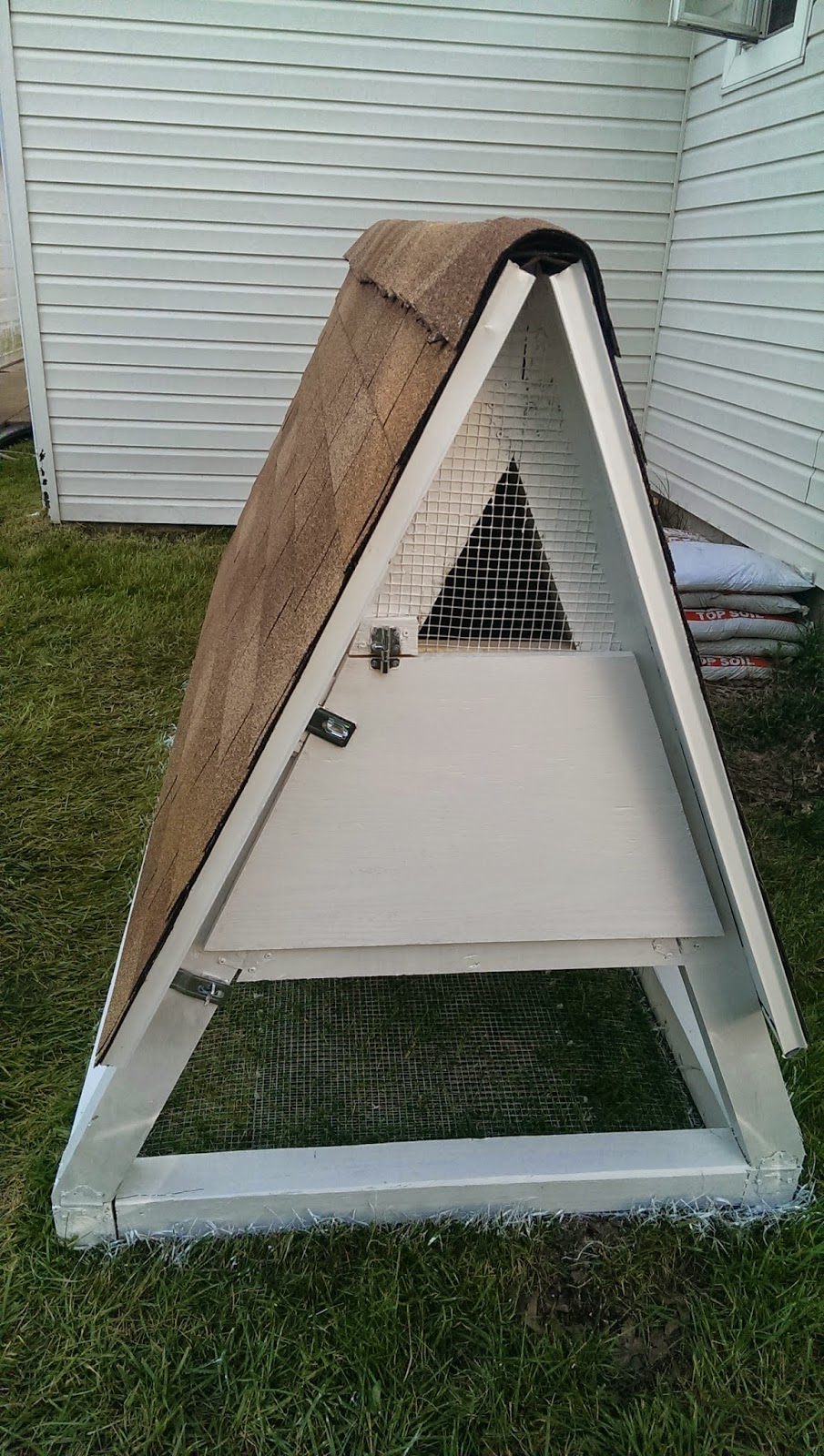 Weekend three (Memorial Day weekend). We put the bottom door on the left. This allows me to access the run and clean it, etc. Then my eldest child helped me install the hardware cloth around the bottom of the coop. You can see the struts installed on the roof, but we still use a stand to brace the roof as an added safety measure. 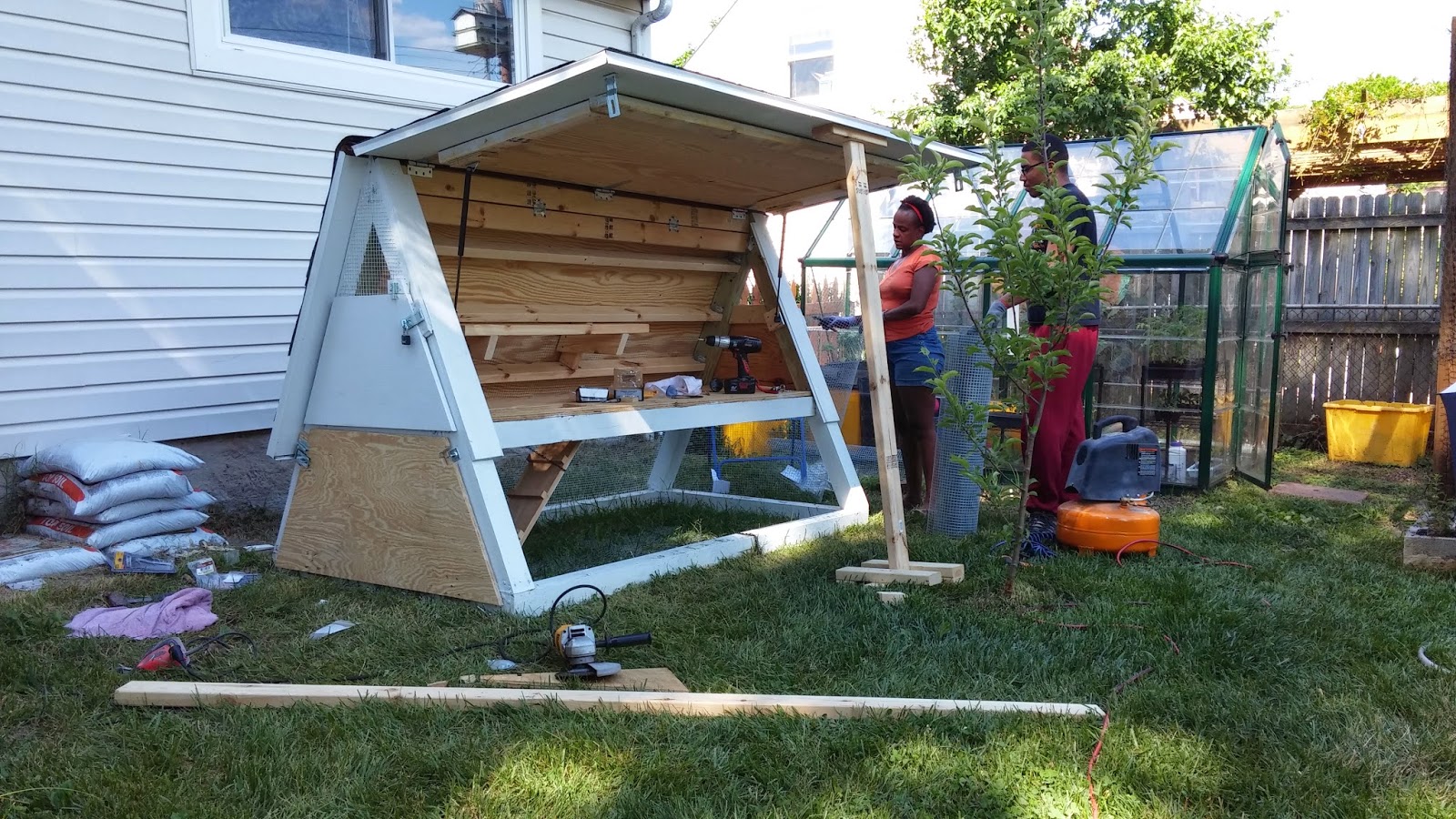 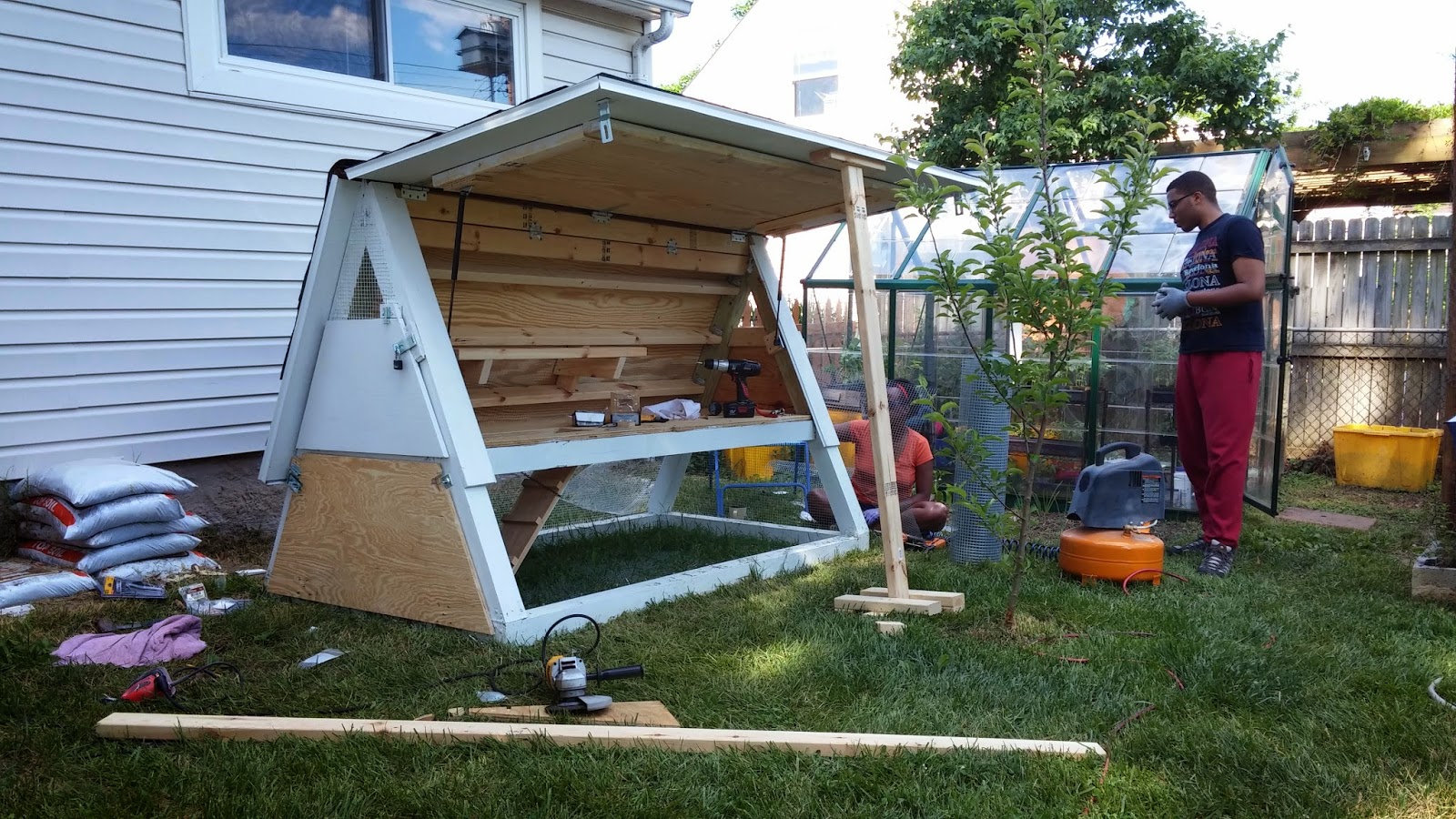 Then it was time for the magic. I put the bedding in. By this time my allergies were trying to do me in, but even through all the sneezing, it really felt good to get the bedding down. You can see the hardware cloth fully installed around the bottom of the run (which I also painted to protect it from rust). 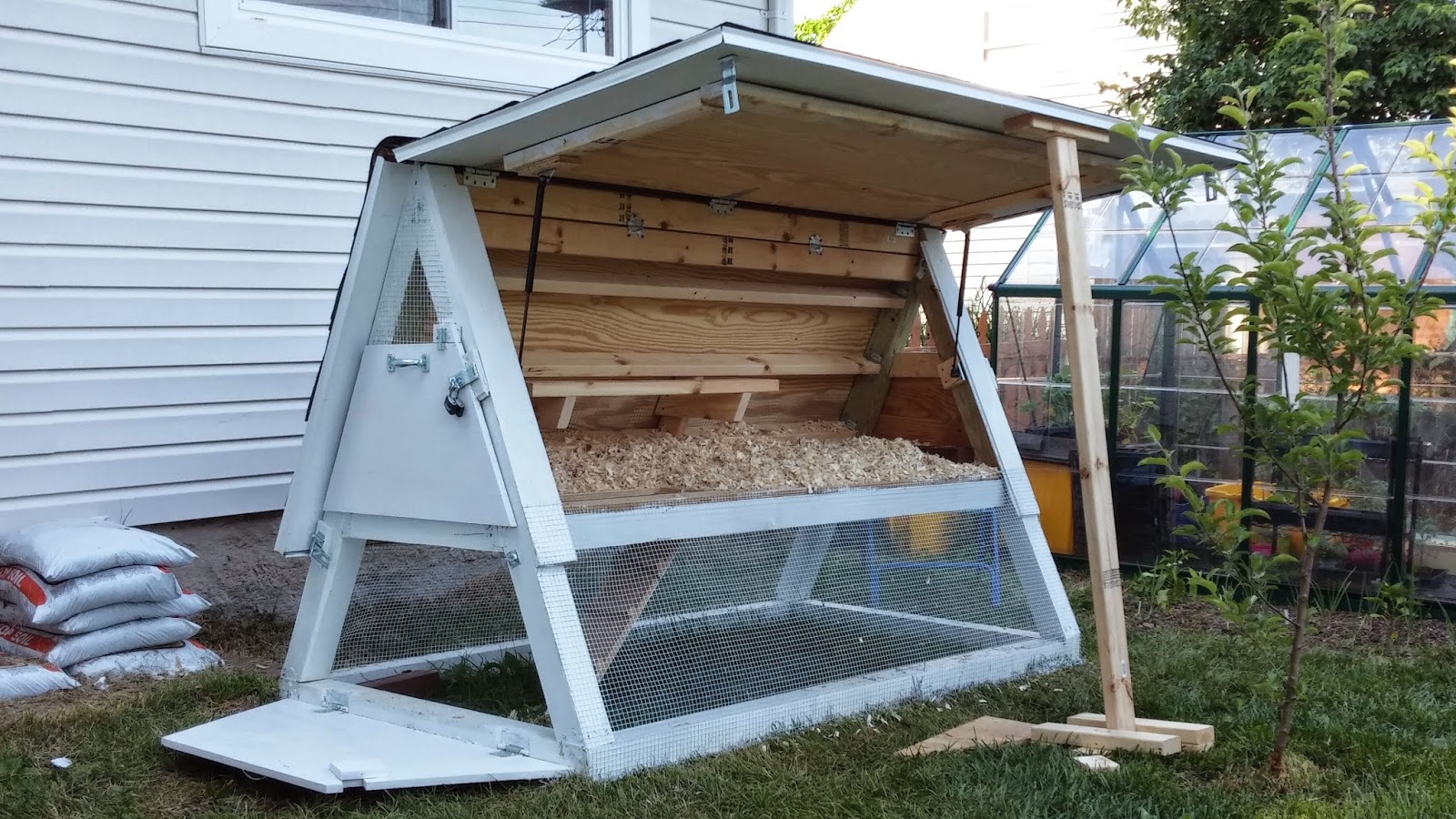 Here’s another shot with the left and front access doors opened. All the doors have locking hasps and are secured with locks that require keys to open. This way I can be sure that the same idiots that stole flower pots and peaches from my backyard two years ago don’t get their hands on my birds or my eggs! A shot with all the access doors open. You can see the roost there toward the left. They love sitting on it too! 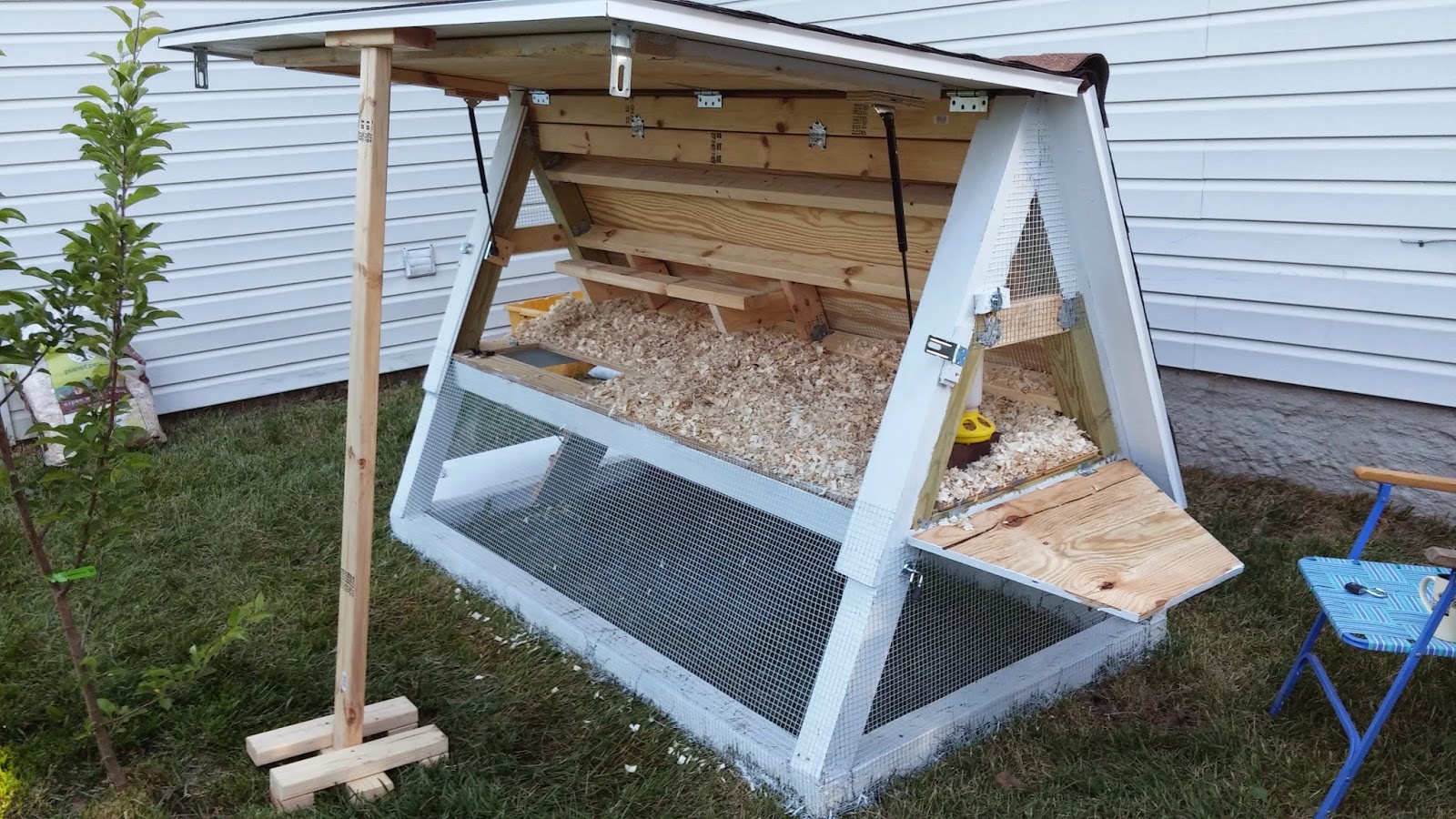 The  coop all closed up with the girls inside. They walked around in the run and ran up and down the ladder a few times. I think they like it. But I know they miss my garden cage. 🙂 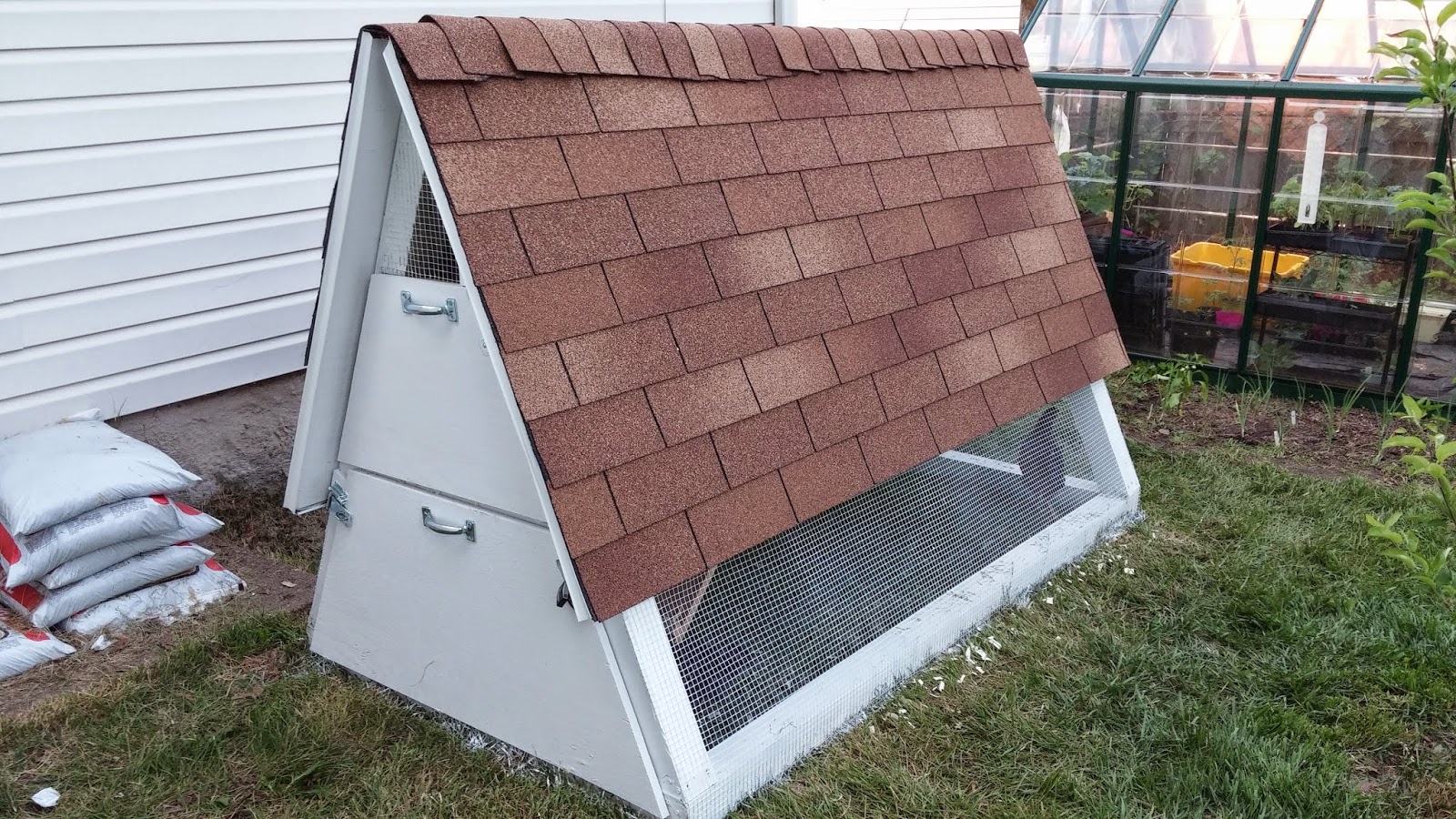 I didn’t know my hubby took this one. But this is me with my handkerchief to my nose just enjoying the end result of a lot of hard work. 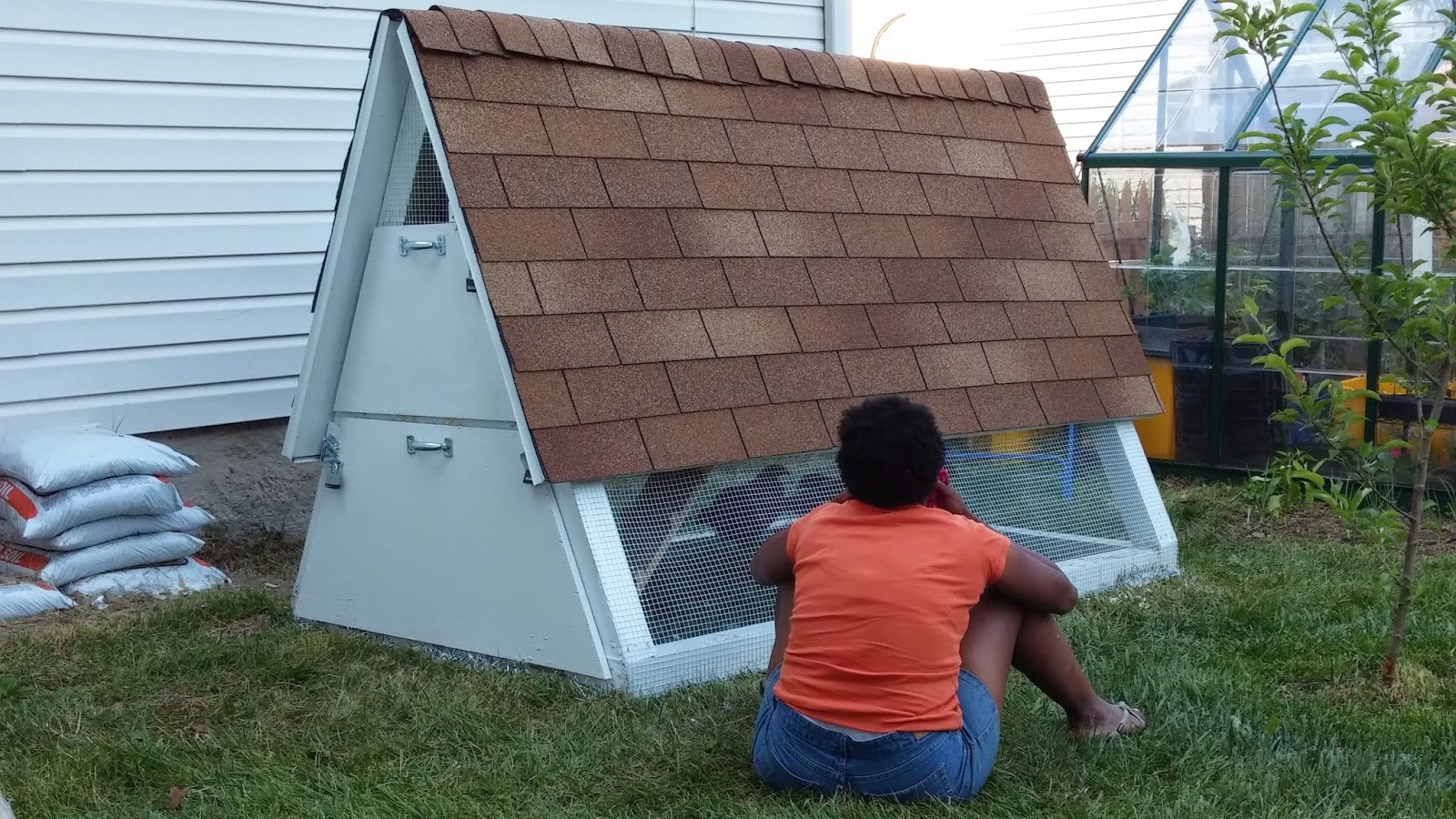 Here’s a nice picture of the girls getting used to their new digs. I even bought them a new feeder and waterer (I’m too lazy to take pictures). The feeder I hung from a nice hook I installed into one of the posts. I have another hook installed in the coop so I can put their food up there when it rains. And my girls also got switched to new food today. They are growing up! 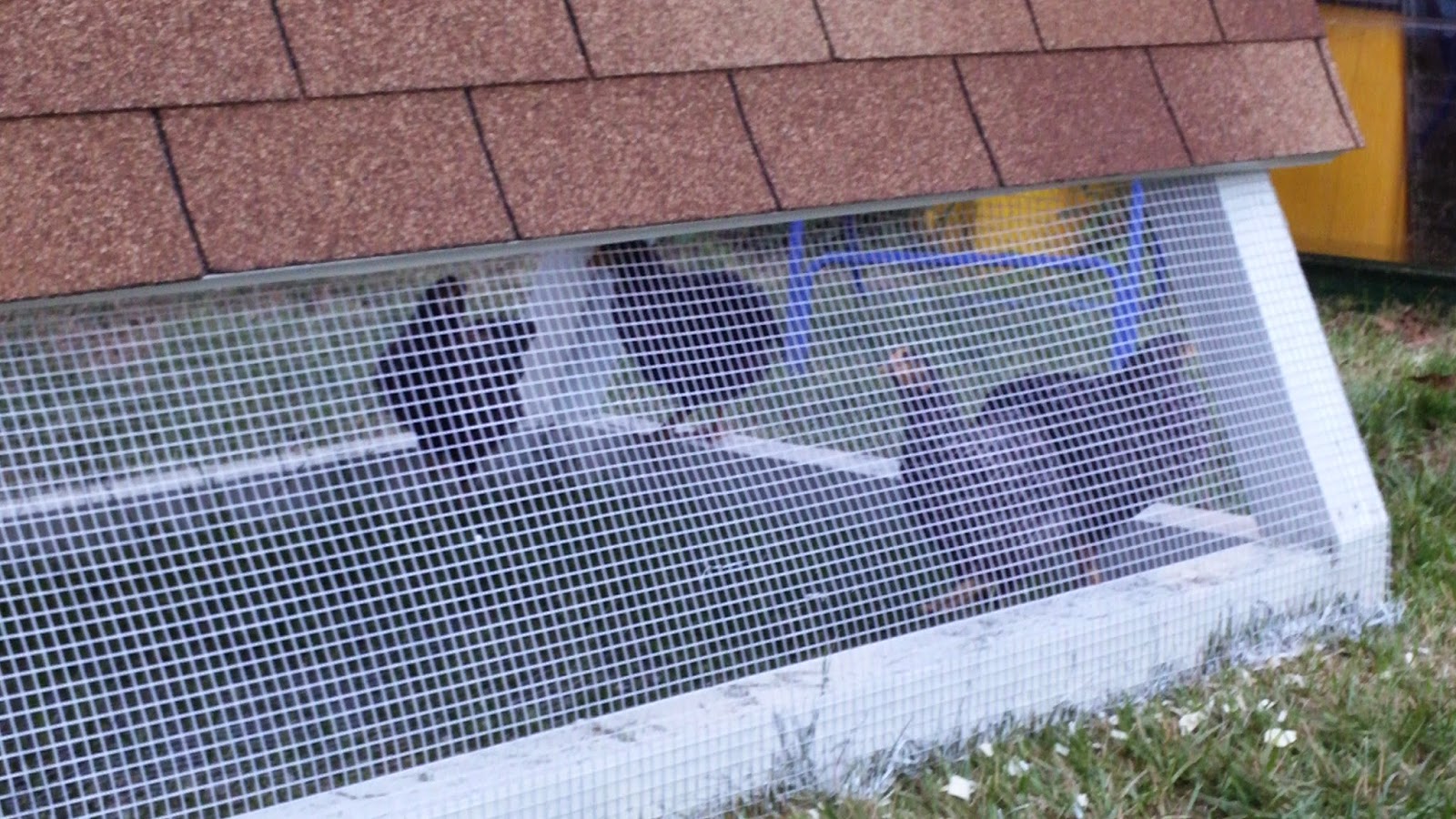 So, that’s it garden gals and guys! My little backyard farm is complete. I ended the weekend by finally planting all of my veggies into the garden! It was a little late, but since the girls used my garden cage as their home during the day, I couldn’t put my plants in…they LOVE anything green!
Again, I must say that it’s my hubby’s ingenuity that made this all possible. I couldn’t think of a better 100th post than this!
Until next time garden gals and guys….