Hello garden gals and guys! I hope everyone had a wonderful weekend. This lil’ ole garden gal was busy from Friday until Sunday evening, and I’m TIRED. But it’s a good kind of tired because we got a lot done here at Fat Earth! So, get your cup of coffee or tea (or whatever your morning cup of joy is), sit yourself on down, and enjoy a stroll with me through my backyard farm.

Where shall I begin? Let’s start with the wood pile. We’ve had these large pieces of wood sitting in our side yard for a few years. They are from a tree my mother-in-law had cut down in her yard. I was so tired of looking at them. So, when we were having some wood delivered, I heard the man mention that he splits wood. He gave an affordable price. So he delivered 5/8 of a cord, then came back with his equipment and split the wood.

These are the two wood piles: 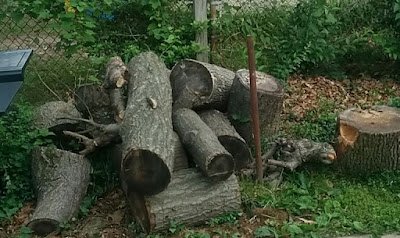 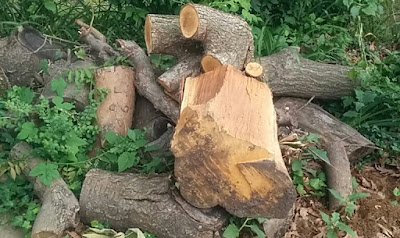 Here’s a little video of them splitting the wood. It took about an hour and a half to get it all chopped up:
Below is the finished product. The wood to the left most side of the frame along the fence (and under my lovely finger….sorry the sun was in my eyes!) is the 5/8 cord that was delivered. Then the piles around the pole are what those mounds of logs were turned into. There was even some cherry wood in there, which he said goes for $1200 a cord! We were geeked! That was put in a box in my greenhouse because it’s good for smoking. The wood in the wood rack is some more wood I got for FREE (gotta love that price!) from someone on Craigslist. 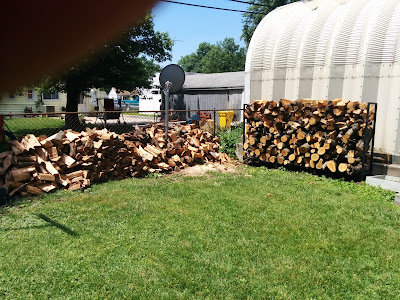 Pretty cool, right? All except for my dang finger being in the shot. I know, I know.
After the wood was done, your sistah girl was on roll! I decided to cover my garden with some leftover mulch that my wonderful next door neighbor graciously gave to me.  So here’s what it looked like before the mulch: 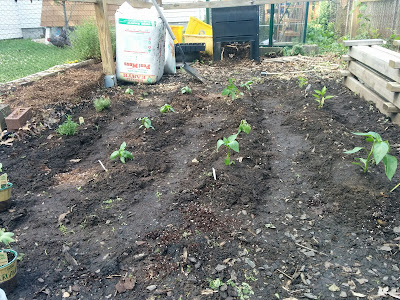 Those were all plants I caught on sale because they “were on their last legs.” You know that was no challenge for me. I snagged basil, lemon thyme, several varieties of pepper and tomato, and two varieties of cucumbers. But, I digress.
So, this is what the garden looks like mulched: 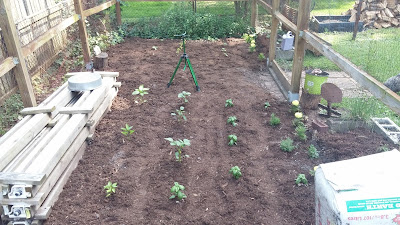 Fat Earth needed a little splash of color, so I added some African marigolds. Some of them had flowers already, the others have lots of lovely blooms starting. You can see them along the chicken wire in the top picture, but here’s a closer look: 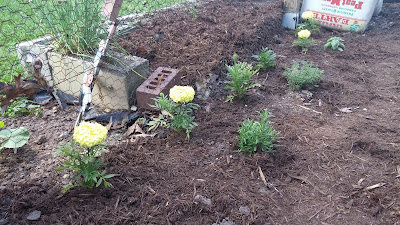 Those marigolds were only a dollar a piece. I got 12 of them. I also snagged some other pretty flowers that I cannot remember the names of right now, other than the daisies. Here they are: 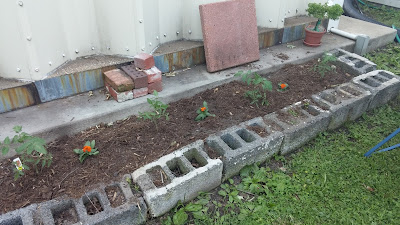 Here’s a close up of the flowers above: 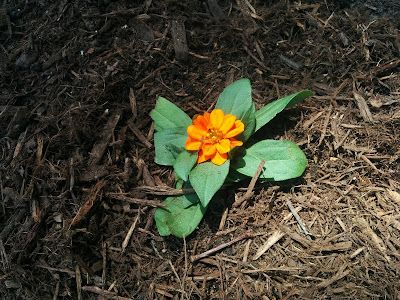 Those orange flowers do quite nicely betwixt my maters! Next up are my sun-colored Gerber daisies: 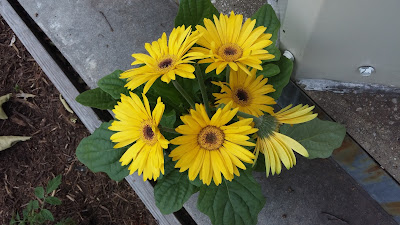 Aren’t they pretty?? I haven’t found a spot for them yet, so I am just keeping them in the pot for right now. Here’s my speckled pink plant (that’s the name I gave it because I forgot what it’s called and I don’t feel like going out to look at the label right now…heehee): 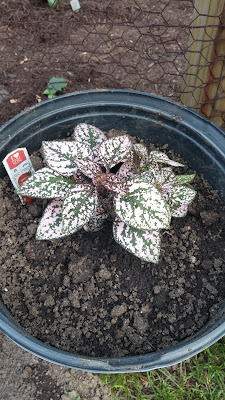 Ms. Pinkie (the plant above) is sitting right outside of my garden cage door. Can’t wait for her to grow nice and big!
I also got some vinca plants to put on either side of my front door. I put them in some pots that I snagged for free from my co-op a few years ago (can you tell that I’m a bargain shopper yet?). 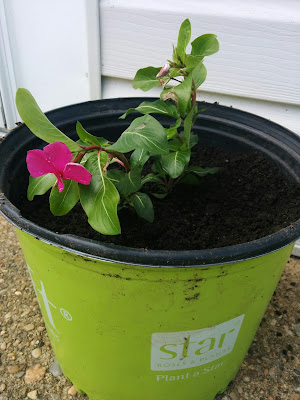 After all this was done, we decided to give the fire pit an overhaul. Hubby wanted it wider and lower. Here are some pics of the build which took all of 20 or so minutes. It began with removing the old firepit and the boys pouring some sand down as a base. 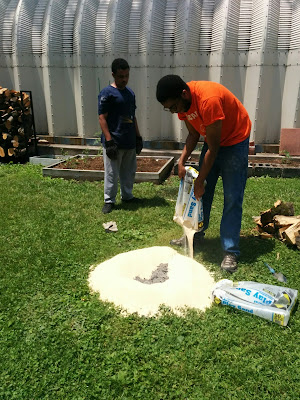 Hubby smoothed out the sand. 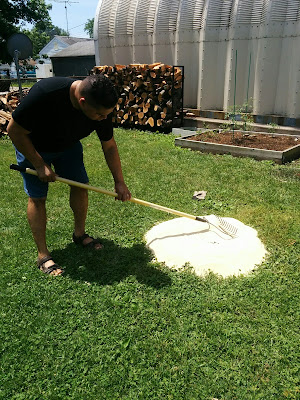 He showed the boys…ahem…excuse me…young men, how to lay the bricks. 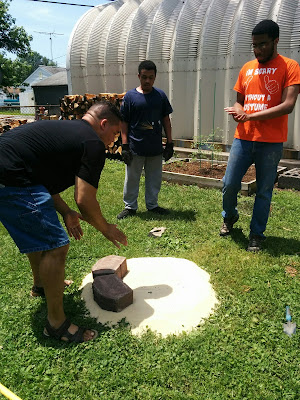 They followed his instructions. 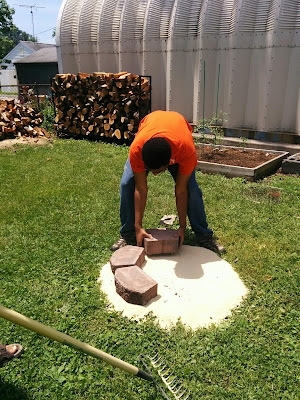 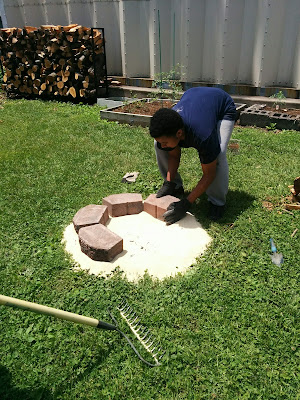 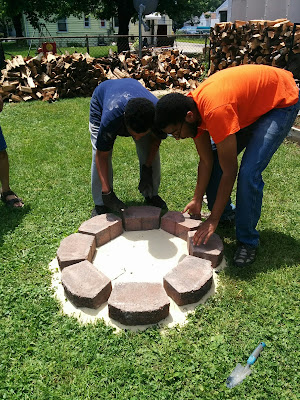 Hubby made some minor adjustments before the second layer was added. 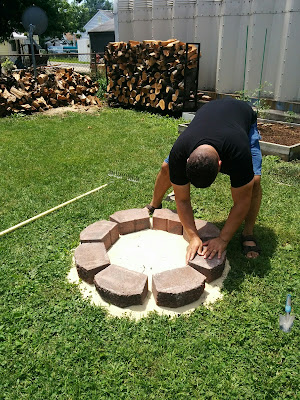 And here we have the before and after! Old: 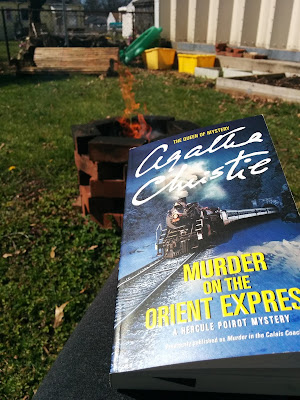 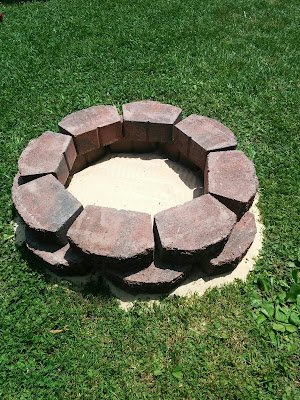 We had some wood that we had started to burn the day before this was built. There were some pieces with lots of ants that the wood guy suggested we burn immediately. We decided to test out the new firepit by burning the rest of the pile we had started the day before.
This is what the fire looked like when I was on duty: 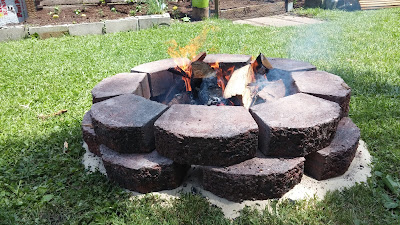 Annnnnd this is what happens when you let your hubby take over: 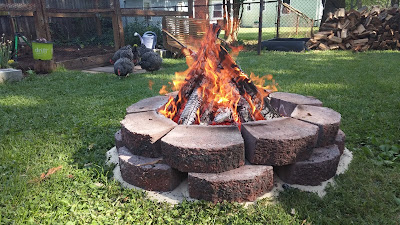 (In my Eddie Murphy voice) now THAT’S a FIRE!! You can see the chickens were keeping their distance and that’s because hubby kept joking about cooking one of ’em! Don’t worry, I won’t let him get my girls. 🙂
Speaking of girls, they LOVED this weekend. They were out grazing all day Saturday and Sunday. Naturally, I had to get some chicken selfies.
Here is one hubby calls CWA (Chickens With Attitude): 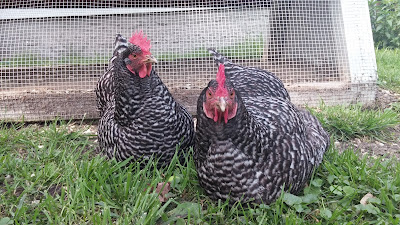 And below is one of the girls under my oregano. See…that’s why hubby always be gettin’ ideas to cook ’em! 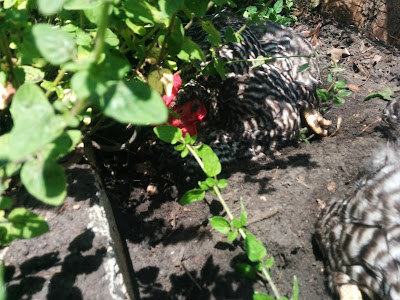 My girls have formed their own chicken cliques. Oh brother. 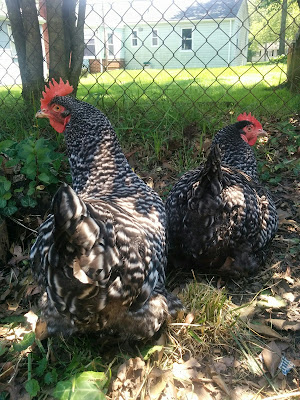 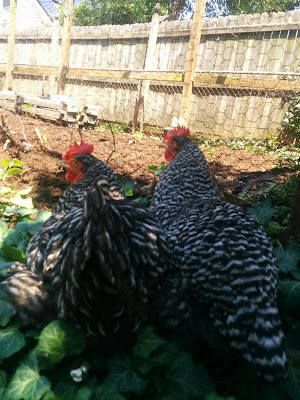 Below, these two were just cooing and talkin’ to each other. I don’t know what they were chattin’ about….probably plotting world domination….again. 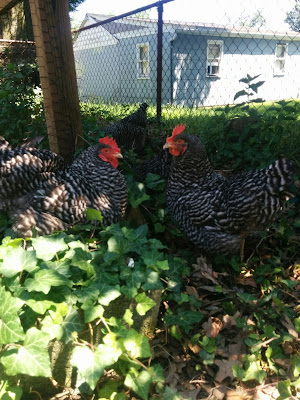 So that’s it folks! Got a lot done!
Now if I could just get hubby to build a frame for the wooden swing my neighbor gave me…..
I hope you enjoyed this stroll through Fat Earth! Don’t forget to leave comments on the blog! I’d love to know who’s out there reading!
Until next time….
Happy farming!