I know it hasn’t even been a day since my last post, but now that I am starting to get just a little energy back I decided to get my seeds started! I had to…otherwise I’d have to buy plants from my local nursery and I have a lot of great heirloom seeds that I purchased that you just can’t get at the local  nursery. 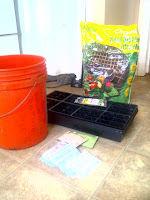 So here’s what I needed to start my seeds: a bucket, a bag of seed starting mix, cell packs and trays to hold them, plant markers, and (of course) seeds!

I began by pouring some of the seed mix into the orange bucket. I added water and mixed until the mix felt like a well-wrung damp sponge. I took one of the cell packs and put it in a tray and then filled with the mix. 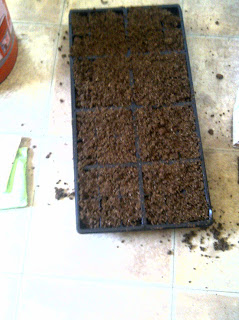 Next, I decided what seeds would go together in what trays and began labeling the plant markers. This step helps me to organize my seeds by their growing needs (for example, I put my peppers in a tray with other seeds that take a long time to sprout and/or need bottom heat).

I must admit that I am not fond of planting the small seeds. Oregano is REALLY tiny. In fact, one seed is about the size of a period (.) and when you couple its size with the fact that it’s a brown seed, well let’s just say it makes it really difficult to know when the seed is in the soil. While I’m on seeds, here’s a tip, the larger the seed, the deeper it goes into the soil mix. So really tiny seeds need only be put on top of the mix with only a very fine misting of soil mix put over top of them. Seeds for cucumbers, beans, watermelons, cantaloupe and the like should be pushed down into the mix, but not too deep, about the depth of the tip of your finger.

But I digress. After the seeds are planted, I put them in various locations in my laundry room and this is what they look like: 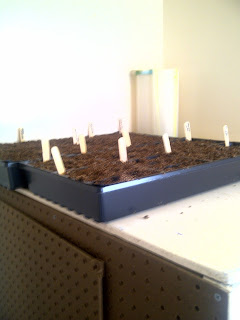 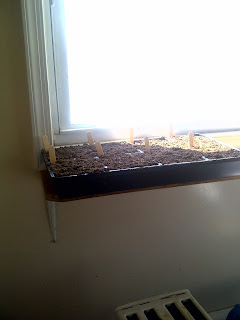 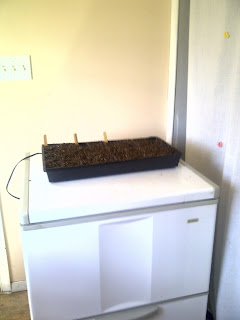 Pretty boring, right? Maybe to some, but not to me. Most might see just a tray of soil mix, but I see tomatoes, cucumbers, fennel, onions, carrots, peppers, watermelons, basil, oregano, kale, lettuce, beans, and cabbage!!!
When you think about it, I guess it takes a little bit of faith to grow seeds. It always amazes me how something so wonderful like a plant that produces fruits and vegetables I can hold in my hand (and some that I need two hands to hold) comes from such a small seed. I mean think about that…in that seed is everything that’s needed to grow the food that nourishes our bodies. That’s pretty cool!
Well, this is all for now garden gals and guys!!! Until next time…
Happy gardening!!!!