How to Preserve Your Peaches

The Georgia Peach truck made another stop through Maryland! I got another box of that juicy sweet goodness to preserve for the winter. 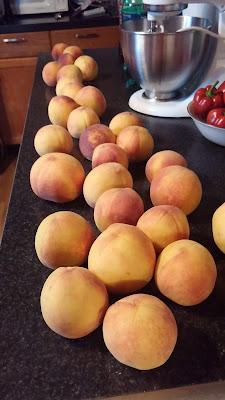 Okay, I confess.  I hate canning.  It’s not the work, it’s the heat.  The kitchen becomes hotter than hell’s pepper patch when the canner is going.  I’m not interested in it being hotter in my home than it is outdoors.  Ain’t nobody got time for that!  This garden diva chose to use her foodsaver instead.

Come on in the kitchen and I’ll show you how it works.

Ah, I’m glad you asked.  Blanching is a cooking process where your fruits (or vegetables) are scalded in boiling water for a brief period and then put into ice water to stop the cooking process.  It has a lot of benefits, but in my case I do it to make the skin easy to peel off.

Take a sharp knife and cut an ‘x’ on the bottoms of the peaches.  It doesn’t have be deep, just enough to pierce the skin. This will make it easy to peel the skin off later. 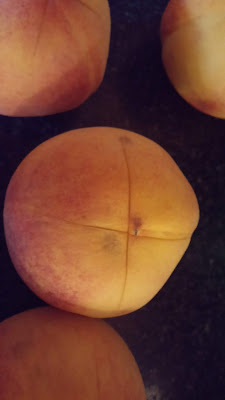 Next, heat a pot of water to boiling on the stove and prepar a large bowl of ice water.  Once the water is boiling, place a few peaches at a time into the water.  Boil for one minute only. 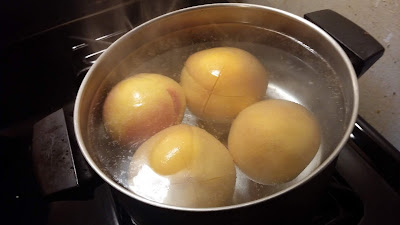 After one minute, remove the peaches with a large spoon or a ladle and place them in the ice water for one minute, then remove.  This stops the cooking process. 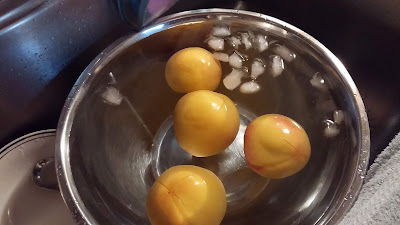 Use your knife and peel the skin off where you made the cuts. It will come off easily. 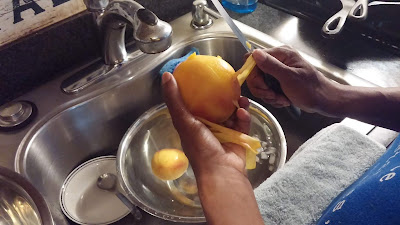 Once the skin is removed, you will see a line in the peaches. 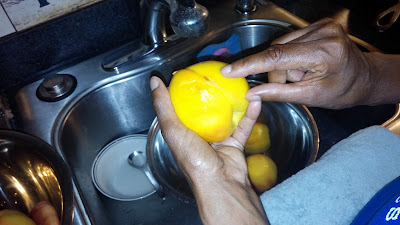 Cut down into that line and continue all the way around the peach. If you don’t see a line, cut around the center of the peach lengthwise. 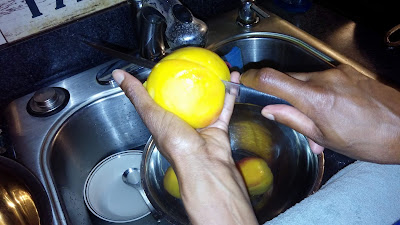 Using your fingers, pry the peach open. It should split right in half like this: 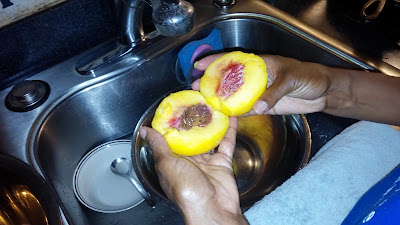 Remove the pit and place the peach halves in a bowl.  That’s it!  Easy, right?  You may be asking about saving the pits.  Yes, you can! I saved pits from the last batch I bought so I didn’t save any this time.

As I mentioned earlier, I don’t like canning, The method I used to preserve my peaches is foodsavering.  I love my foodsaver.  I’ve had it for quite a few years now.  It’s a bit of an investment up front, but worth it.  It pulls all the air out of the bag and seals it, ensuring that your food doesn’t get freezer burned.
So here are my peaches ready to be preserved. 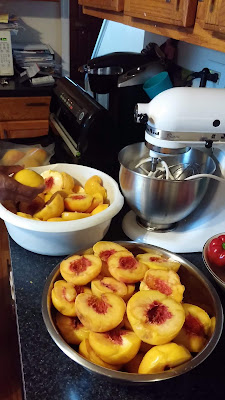 In the picture above, the black machine next to the mixer is my foodsaver.  Determine how many peach halves you want to add to each bag. I put 12 halves per bag. That’s a good serving size to make most things.  The machine did its magic.  Here’s the end result: 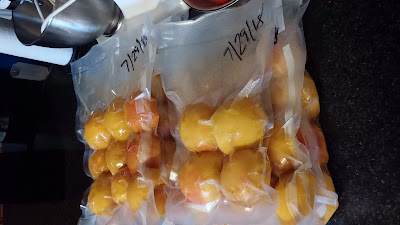 Five large and one small bag of peaches!  Next stop: the freezer.
The whole process took an hour from start to finish.  Along with the peaches I froze from the last box I bought, fresh peaches in the winter months won’t be a problem.  Now that’s winning.

Two more things before I go.  Here’s my little harvest of tomatoes, mini bell peppers, cucumbers, and eggs from my girls.

You may remember my oldest son’s love for pickles.  If so, you know the fate of those cukes. 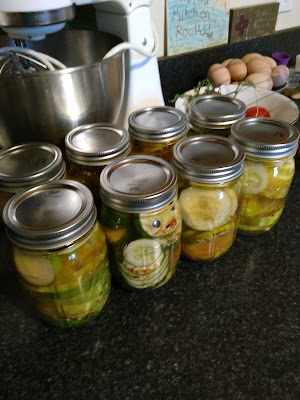 Refrigerator pickles are the best.  Ready in hours instead of weeks. One of the jars is smiling at you.  Do you see it? Take a closer look:

I showed it to my hubby.  He said it’s cute in a creepy sort of way.  🙂
So that’s it garden gals and guys! Until next time…
Happy farming!