Driveway Demo, Flower Beds, and The Almost Demise of My Thumb 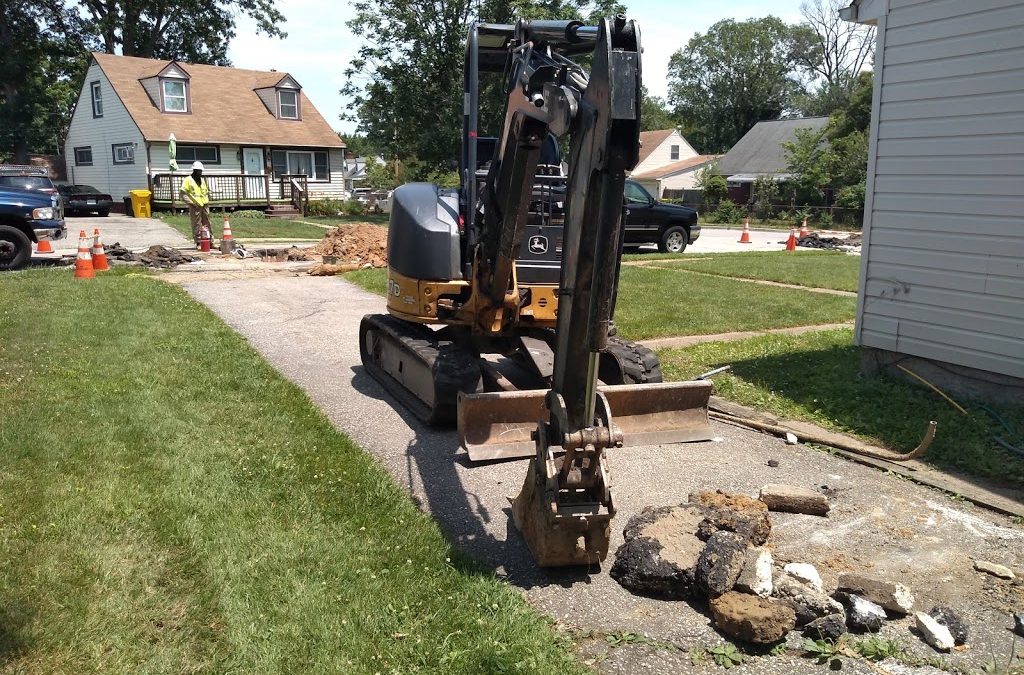 Hello garden gals and guys! There’s been a lot goin’ on here at the Fat Earth Backyard Farm so let’s just get right to it.

BGE has been in our neighborhood since June digging up roads, sidewalks, and driveways to replace the gas lines in our neighborhood.  They got to me on July 3rd. They were supposed to dig two holes: one by the house and one at the edge of the driveway.

Of course you know they had a problem, right? They couldn’t catch the gas line (whatever that means) and so they ended up digging a bunch of holes in our driveway.

Y’all know I am particular about my yard. I wasn’t thrilled at all about them having to make a demolition scene out of it.  But there was nothing I could do. The work began. 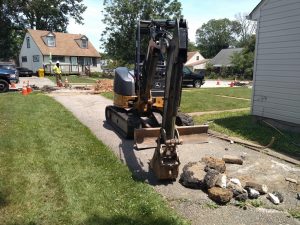 Here’s a couple of shots of some of the holes they dug: 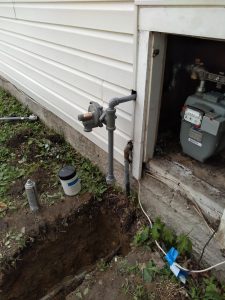 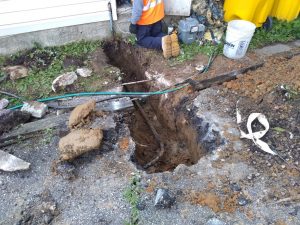 Here are two more of the holes they dug at the end of our driveway and in the road: 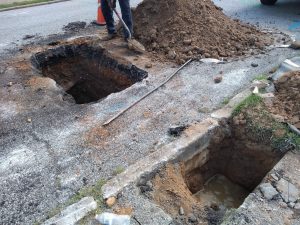 Here is the mess they made of our driveway. It was HOT that day. With the humidity it felt like 101. Notice the food in the pic below? That’s because I got out in the backyard and grilled burgers for the BGE workers. I also bought a case of bottled water and some ice and kept it next to the food. 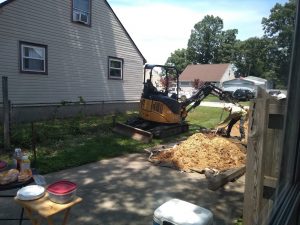 After it was all said and done, they put in their ugly temporary patches.  Then told me they weren’t sure how long it would be before the professional pavers came to fix their mess.  So this is what we were left to look at. 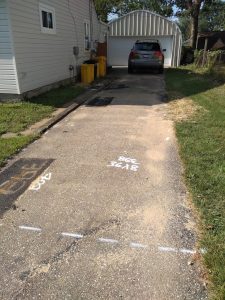 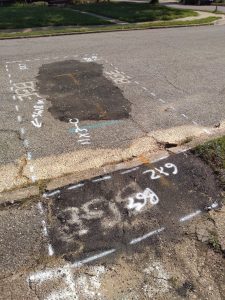 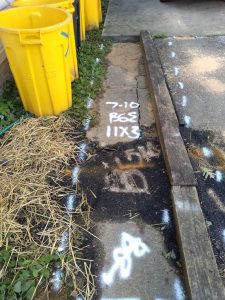 The markings you see are what the BGE employee marked off as fixing. He told me he wasn’t going to replace the entire driveway, just the portion inside the white lines.  We had a very interesting conversation.  I told him the asphalt was old and that it would look funky if more than half the driveway was new and then a small slice was left of old asphalt. He didn’t care.
Well, about a month and a half later, the man who owned the paving company came to our door. He told me he was contracted by BGE to fix everything and asked me if I minded him replacing the entire driveway because it didn’t make sense to him the way BGE had it marked.
I could have hugged him. I explained the spirited discussion I had with the BGE employee who marked off the areas to be replaced.  He said he would replace the entire asphalt part of the driveway.
He also stated that it would be more cost effective and make his job easier if we allowed him to take up the sidewalk and just widen the driveway.  Hubby and I have always hated those stupid wood beams at the edge of the driveway anyway, so we quickly agreed to his idea! In the winter months they always became slippery beams of death that tried to take me out numerous times.
Well, about a week ago, they finally got around to replacing the driveway.  I was so tickled I took lots of photos.  Here are some really cool short videos of them removing the old driveway. This one is the work beginning.
It’s amazing how the right machines can make a job go quickly.  This would have taken days if they had to do it by hand.  Here is another video of the driveway almost all gone:
Here is one with the driveway completely gone. They were removing soil and flattening the land to install the new driveway.
Here’s what it looked like before they put the new driveway down: 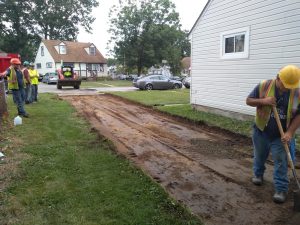 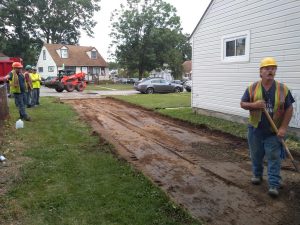 Unfortunately, hubby and I had to leave for an appointment, so I wasn’t able to get video of them putting down the asphalt. But here is what the driveway looks like now: 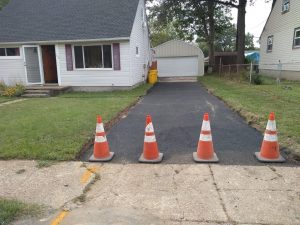 This is just the first layer.  Pat (the owner of the paving company) said the ground was soft so he wants to give this a month or two to settle before he puts down the final layer.  Once he does that, then I will get out there and taper the lawn down to the driveway so there won’t be such a huge ledge like there is right now.
In the meantime, this pretty new driveway (all paid for by BGE) inspired me to get out and do some work of my own.  They put a nice little ridge where the wood beams used to be and it makes for a nice flower bed.  So I decided to make it official.
Here’s what it looked liked before I started: 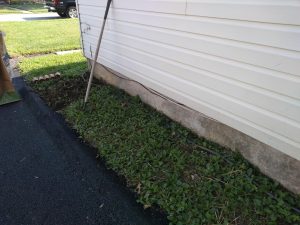 Here’s the after photo: 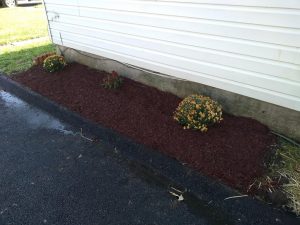 I added mums and dianthus (the middle flower).  The dianthus is a perennial.  I also added rubberized mulch.  It looks pretty, keeps its color for years, and doesn’t attract termites and other bad pests. I’m going to install gravel in the rest of the area along the driveway since that’s where our garbage cans sit.
Since I did this side of the house, I had to show the other side some love.  So I started with the area along the picket fence.
Before: 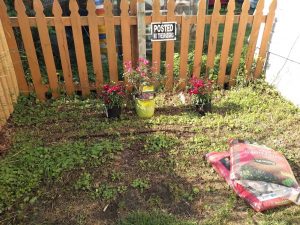 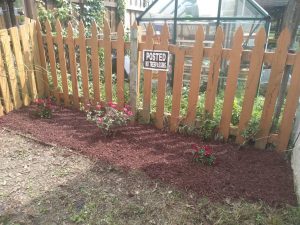 I added dianthus over here as well.  In the middle I planted a knockout rose.  Then, once I did this, I had to do the along the house as well.
Before: 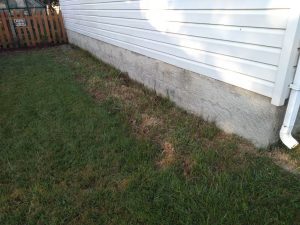 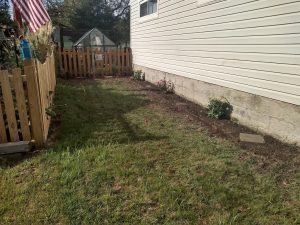 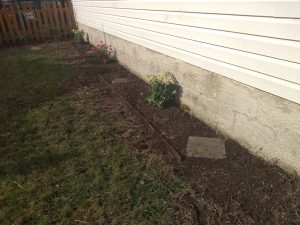 I planted another knockout rose in the middle. I don’t remember the name of the other flowers, but they are perennials as well. I am looking forward to them coming back each year.
While I was digging up this bed, I found some old stones.  So I flattened out the soil and placed them in between the plants.  I am not sure if I will put flower pots on them, or just leave them blank as decoration.
Each area I dug took about 2 hours.  I broke those projects up into 3 days, doing each in the early morning before it got too hot.  I’m pretty proud of myself!
So that’s what’s been happening here y’all! Not exactly growing food related, but I just had to share.
On a garden note, my tomatoes are doing pretty well.  Here’s a little harvest: 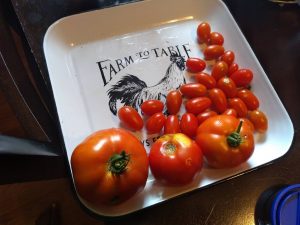 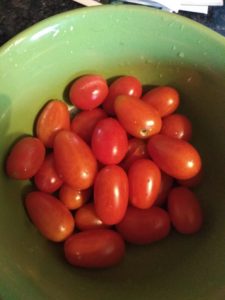 The eggplants I am growing for my mom are going crazy!  Here is one of the two plants.  There’s at least ten eggplants on this one alone.  She’s gonna be very happy. 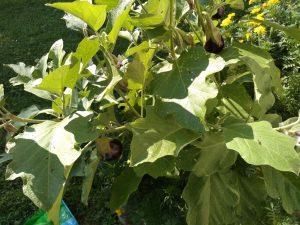 Now on to my thumb.  So…I bought this new knife because I was tired of mine messing up my beautiful garden fresh tomatoes.  Well, it’s sharp. Really sharp. 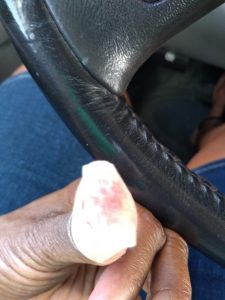 After three days of having to change bandages, I decided it was time to go to urgent care.  Apparently it needed stitches, but since I waited so long they couldn’t put them in (too much risk of closing bacteria into the wound and causing an infection).  Instead they gave me an ugly splint to put over it to keep it from banging on things. 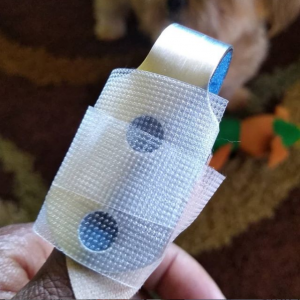 It’s finally healed, but I have a nice little chunk of my thumb missing. Oh well.
That’s all for now garden gals and guys.  Until next time…
Happy farming!