A Cage Rises in Upper Marlboro

Hello Garden Gals and Guys! Occasionally, I like to feature other gardens on my blog. I just think it’s inspiring. Well, this one is sure to inspire you. My mother-in-law has been wanting a smaller version of my garden cage for a while. That wish has now come true!  I’ll do a little talking, but I’ll let the pictures tell the story.

It began with a grassy spot where she has her garden every year: 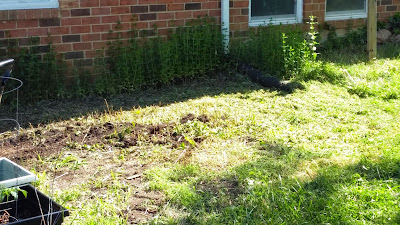 The spot was then tilled to turn over the soil: 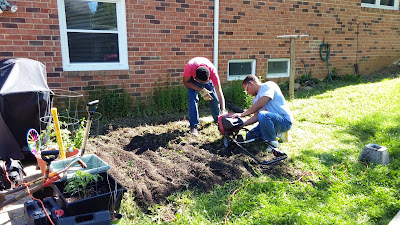 Then metal stakes were driven into the ground and the 4×4 posts were put in,checked for level, and and all that good stuff: 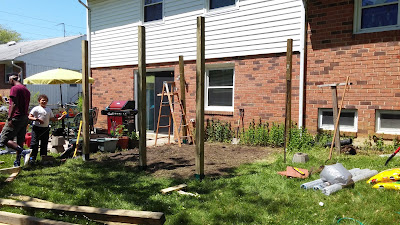 Then more 4×4 posts were installed to frame the roof of the cage and the walls: 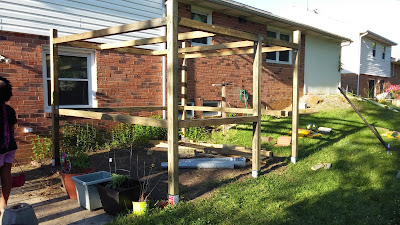 Then the posts were trimmed to make the top of the cage even. Angle brackets were also installed in all of the corners where the wood met to make the frame nice and strong. I don’t have a good picture of them putting them in, but there were A LOT of them). 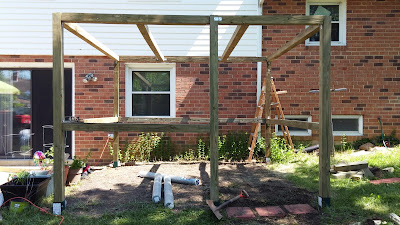 Then the door was built and hung, which I don’t have any action shots for (sorry!). Then the cage was wrapped in chicken wire (this part took a LONG time): 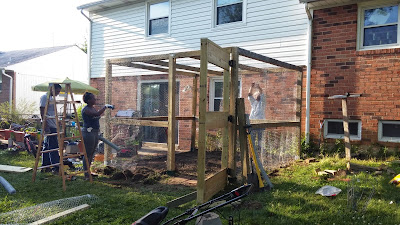 It took all day Saturday and Sunday to build, but by 8:30pm on Sunday, after much sweat, hard work, and yes even some shedding of blood (my hubby smashed his thumb with the hammer) this was the result: 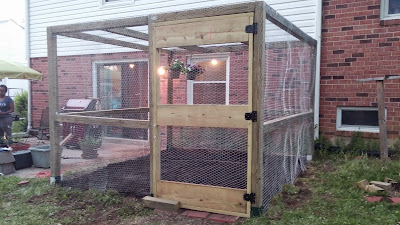 We were losing daylight fast, so my mother-in-law (who is very handy) put the door handle on herself. As you can see, she already  hung her flower pots in the cage, and she bought some solar-powered lights to install too (heeeyyy…no fair…I never thought of that for mine! I’ll be doing that soon!). She even came up with a name for her garden: “Big Enough”. She said it was in memory of her aunt who lived in a small house, and when people would comment on the size of it she would say “it’s big enough”.  I think that’s pretty cool!
So, that’s it folks. What a weekend it was. The weather was beautiful and we had a good time and even cooked out during the whole thing. I think my mother-in-law will be spending A LOT of time out there now! I can’t wait to see how things get growin’.
Until next time garden gals and guys….
Happy gardening!!!!